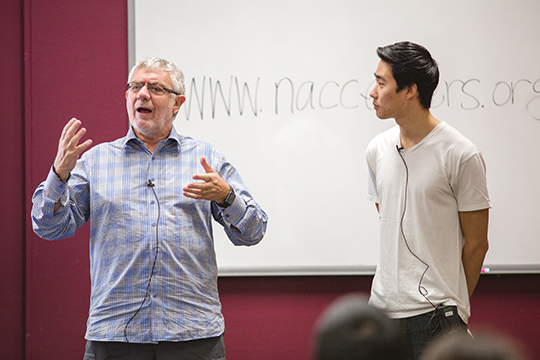 To open the lecture, Lee posed hypothetical situations that challenged students to make life or death decisions. In the first example, Lee asked students whether they would pull a switch to change a train’s direction and in effect save five people’s lives instead of saving one person if no action was taken. 87% of the students said they would pull the switch and let one person die instead of five. In another example, students were asked if they would physically push someone into harm’s way if it would mean saving more people. This time, responses were split fifty-fifty.

Noting the shift in responses from students as to which course of action they might take to change a situation, Dr. Struppa commented, “To me, what it tells us about us, about our human nature, is that our philosophical position will be modified by the context.” One student, Alejandra Hernandez, a Class of 2020 NAC Scholar, struggled with her decision: “I didn’t want to push the guy off [the bridge] because I didn’t want to feel guilty, but I didn’t want to let the people die either.”

Lee attributed this shift to the concept of omission versus commission. With omission, interaction is minimal, and therefore one will likely feel less guilty about his or her role in changing a situation’s outcome. With commission, the person facing the ethical dilemma becomes more physically involved, and therefore takes on more of the burden of the outcome. Nomar Santana, a Class of 2018 NAC Scholar from NOVA Academy, found the dilemmas very challenging: “You really had to ask yourself, would you be willing to do this to save someone’s life? It’s these types of ethical, moral, deep questions you don’t really ask yourself normally.”

In addition to omission and commission, Lee and Dr. Struppa also discussed utilitarianism and deontology. According to Lee, utilitarianism concerns “the greatest good for the greatest number.” In contrast to utilitarianism, deontology represents “an approach to Ethics that focuses on the rightness or wrongness of actions themselves,” according to philosophybasics.com. To give an example, Lee suggested that one could not cause harm to others.

For the second half of the presentation, Dr. Struppa and Lee discussed cancer prevention and quizzed students on their knowledge of the causes of and potential cures for cancer. While the presenters noted that understanding cancer “will require understanding of biology, chemistry, physics, medicine, mathematics, statistics, sociology, public policy, and more,” they also shared basic statistics and suggested preventative measures, such as diet and exercise, and especially regular testing for early detection. Luz Rodriguez, a class of 2018 NAC Scholar from Santa Ana High School, remarked, “One thing I found interesting is how you can cure some cancers with early prevention, for example, doing a mammogram or some other tests that can prevent and potentially save you from a lot of terrible situations you don’t really want to be in.”

To close, Dr. Struppa commended the students for making time to pursue their studies on a Saturday morning, and he added, “College has this tremendous transformational power. When you think about college, I want you to think about jobs, financial stability, and personal intellectual growth.”