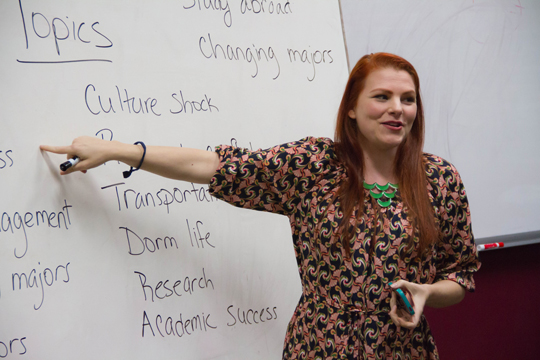 When she moved to Santa Ana in September 2007, Janae Dimick divided her time between attending classes in her second year of graduate school at Cal State Fullerton, and working as a tutor in the University’s Writing Center. Drawn by the prospect of working in the community for a non-profit organization, Janae answered an ad in January 2008 in Craigslist for a tutoring job at the Nicholas Academic Centers (NAC). Janae remembers, “I felt that the NAC’s mission was vital, and I wanted to be a part of that.”
During the NAC’s first year of operation, with a senior class of 24 students, the Directors of Academic Services also handled the Higher Education Services, helping seniors with college applications, financial aid, and more. As the NAC’s student body grew, it soon became apparent that the demand for higher education tasks would require a full-time, dedicated position. On August 1, 2009, after earning an M.A. in English from Cal State Fullerton, Janae accepted the role and responsibility of becoming the NAC’s first Director of Higher Education Services. Charged with the task of developing the Higher Education department, Janae had her work cut out for her, especially considering she was also working as an adjunct professor, teaching writing classes at Chaffey College in Rancho Cucamonga.
Graduating seniors of the NAC Class of 2009 went on to attend schools like Denison University, UCLA, Morningside College, and Allegheny College, among others, but the NAC, in its newness, was relatively unknown. While Janae developed the Higher Education Services department, creating college knowledge and college transition workshops and reading books like Loren Pope’s Colleges That Change Lives and other research publications for both information and inspiration, she also focused on contacting schools and attending conferences like the National Association for College Admission Counselors (NACAC) annual conference. “I think the first time I knew we had ‘made it’ on the college scene,” Janae recalls, “was when Rosa Diaz (NAC Chief Officer of Operations & Programs), Clint Gasaway (of Wabash College in Crawfordsville, Indiana), Gerry Oxx (of Godinez Fundamental High School in Santa Ana), Andre McWell (of Morningside College in Sioux City, Iowa), and I presented at NACAC in Denver. Hundreds of people came to hear us speak about what the NAC does, which, for me, was a highlight of my time at the NAC.”
Over the years, the NAC’s student body continued to grow, as did the demands on Janae’s department. In June 2010, after Janae’s first year as the Director of Higher Education Services, the NAC graduated a class of 65 seniors. Three years later, the senior class grew to 124 students. The Higher Education Services department added Chandra Jenkins, Assistant Director of Higher Education Services, as well as Ivana Villarreal and Maria Cortes, Higher Education Services Coordinators, to the roster. The additional staff allowed Janae to focus more on maintaining relationships with NAC alumni, a contributing factor to their retention rate, which remains at 94% for students enrolled in private 4-year institutions, and 87% for students enrolled in 4-year public institutions. Janae notes, “Many of our students’ parents are not able to travel to visit their kids, so, in this way, the NAC acts as an extended family. Being a college student is challenging; you’re experiencing culture shock, academic shock, and sometimes weather shock. Simply seeing a familiar face can make all the difference in the world for our students, so we try and be that familiar face.”
Alexis Rodriguez, who will graduate from Wabash College this spring, is thankful for Janae’s familiar face: “When I applied to Wabash College, I was invited to a college visit. Janae decided to come along in order to network with Wabash’s personnel, which later became a key component to get more Santa Ana students accepted into Wabash.” Alexis adds, “Overall, Janae has been there for me every time I have needed her, whether it was concerning a college question or if I just wanted to talk to someone.” Ana Rodriguez, a junior at Georgetown University in Washington, D.C., also appreciates Janae’s willingness to offer support, even from over 2,000 miles away: “She helped me gain the peace of mind I needed to make it through a very difficult internship experience. She’s the kind of person who will give it to you straight, but won’t be frightening. In fact, it’s quite the opposite. I always felt very empowered after conversations with Janae.”
This winter, Janae announced that she would be leaving the NAC to continue pursuing her PhD in Education, with an emphasis in Culture and Curricular Studies, at Chapman University, and she will return to teaching at local community colleges this spring. In the near future, Janae expects to get a book published that she co-edited and co-authored with fellow graduate students and Barry Kanpol (of Purdue University). Peter Lang Publishing will publish the book. After earning her PhD, Janae intends to pursue a tenure-track position at a four-year or two-year college, as well as pursue a career in writing. Janae claims that regardless of the direction she goes, she’ll take the NAC with her. “I strongly believe that my experiences at the NAC have made me a better person and educator, and I think that what I have learned here will help me better understand my future students.”
On Monday, January 13, 2014, Maria Cortes succeeded Janae as the new Interim Director of Higher Education Services.
Jan 22adminNo Comments