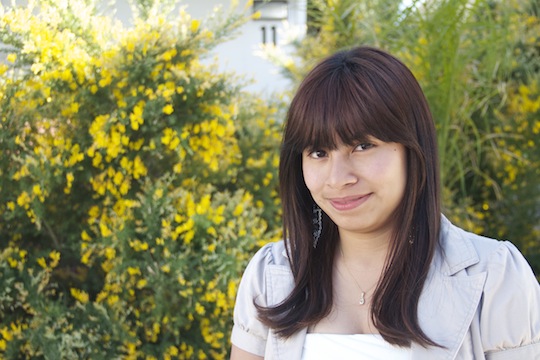 Soon after she finished the fourth grade, Yadira Calvac left California with her family for what was supposed to be a visit to her grandmother’s house in Quetzaltenango, the second largest city in Guatemala. Yadira’s uncle, who took care of her grandmother, passed away unexpectedly, and Yadira’s father did not want his mother to be alone. It wasn’t long before he announced that the family, including Yadira’s older brother and younger sister, would be staying in Guatemala permanently. Yadira’s parents returned to the United States to pack the family’s belongings, and she suddenly found herself living in a strange, new place.
“At first, it was strange because I didn’t understand Spanish.” Yadira’s parents only spoke English at home when the family lived in the United States. Now, living in Guatemala, her parents only spoke Spanish, and they expected her to do the same. “When I started learning to speak Spanish, my dad prohibited me from speaking English. Before it was no Spanish, and then it was no English. I would only speak English at school in English class.”
Culture shock really set in when Yadira left the house. “It was a challenge, even more when moving there, because I was an ‘American girl,’ and they treated me differently. They wouldn’t talk to me because they thought that I thought I was too good for them. At first, I would cry, and I wanted to come back, but it took a couple years before they treated me like everybody else.”
As the years passed, Yadira made friends and kept herself busy playing soccer and attending classes. While going to school seems a given in the United States, Yadira notes education is not equally valued in other cultures, especially for girls in Guatemala. “In Guatemala, you have to pay to go to school, and girls don’t usually study; they grow up thinking that they should stay in their houses, learning to cook and do other things for when they get married.” She continues, “Only women whose parents think differently go to college.” Yadira’s parents, who owned and operated an “American-style” clothing store in Guatemala, encouraged Yadira to take school seriously.
Eventually, the clothing store stopped being profitable, and after two of her uncles moved into the house to help take care of her grandmother, Yadira and her family moved back to the United States. Yadira returned to California as a high school sophomore, and once again, found herself having to adjust to a “new” culture and language. Yadira’s English teacher, Ms. Alvarez, suggested visiting the NAC for English tutoring, and Yadira started working with former NAC tutor Danny Keener. “I was having difficulty reading a book, and that’s when I met Danny. He helped me a lot.”
Since her return to the United States, Yadira has been busy studying in school and volunteering with the NAC volunteers, cleaning up beaches and packing food boxes for the Orange County Food Bank. She also volunteers 16 hours every weekend at the Royale Health Care Center in Santa Ana. “I started volunteering at the Health Care Center because my grandmother on my mom’s side of the family passed away, and that encouraged me to help senior citizens. My grandmother’s caretakers didn’t take care of her very well, and she died of dehydration.”
Now that she is about to graduate high school, Yadira is looking forward to attending Santa Ana College before transferring to a UC or CSU. She is thinking of majoring in Business Administration & Management so that she can one day open her own cosmetics business and beauty salon.
Jun 06adminNo Comments