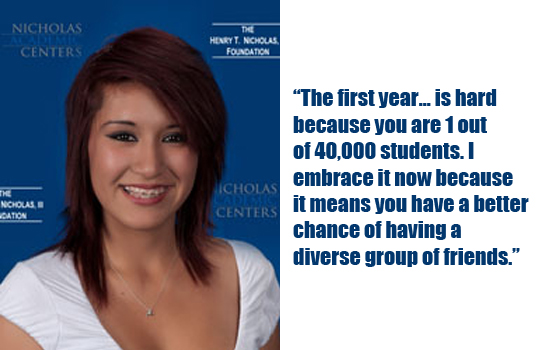 A Small Fish Makes Good in a Big Pond: Catching Up with 2011 NAC Alum, Mariela Garcia

In 2011, after spending three years with the NAC, Mariela Garcia graduated from Century High School in Santa Ana and prepared for life at Cal State University, Fullerton (CSUF). With an enrollment rate of over 36,000 students in the fall of 2011, CSUF challenged Mariela’s self-proclaimed “fear of strangers” and made clear it would take an exceptional student to stand out in such a large pond. But then again, Mariela is a NAC Alum.

Mariela has embraced the “competition,” and turned overwhelming numbers to her advantage: “The first year at CSUF is hard for most people because you are 1 out of 40,000 students. I embrace it now because it means you have a better chance of having a diverse group of friends.” She has made friends on the bus during her commute, in the 21 units worth of classes she takes, and on her debate team, which recently competed in the championships in Pepperdine. Although her team didn’t win, she took it in stride: “The two teams that beat us were the finalists, battling for a national spot! I was thrilled and proud and my team showed their enthusiasm as well.”

Currently, Mariela declares three majors: Political Science, English, and Anthropology. When asked how she arrived at this multi-faceted approach, she answered, “I had originally thought that I would do a History major, but after taking Cultural Anthropology I realized that I was more interested in human societies, cultures and their development. As a freshman, I am already taking some of my Political Science major courses. I decided that before going away to law school, I wanted to major in these three areas in order to feel academically satisfied with myself.”

On campus, Mariela is involved in in-coming freshman mentoring and debate. Off campus, she serves as a mentor at CASA of Fullerton. Before finishing her interview, Mariela offered advice to current NAC students: “My advice is to be open-minded about college. Assuming [you know] what college is about is a big mistake. It’s a different experience for everyone because of the way we all choose to embrace it. You get what you put into it. So just make the most out of college because these years will live with you through a lifetime.”