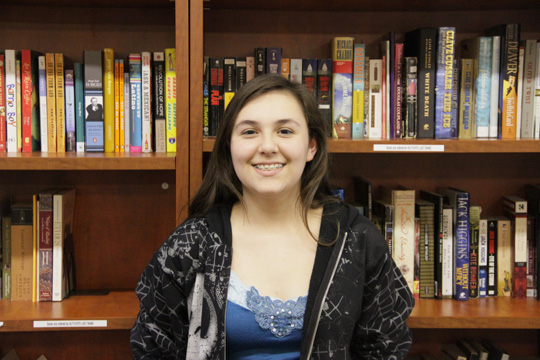 Tuesday, February 27, is a day Nicholas Academic Centers’ student, Katherine Mitchell, won’t soon forget. After spending the morning and early afternoon nervously checking emails for a status update on her application to the Harvard Secondary School Program, Katherine decided to relax by getting back to work: “I checked my email all morning and realized I just needed to focus on other work I had to get done.” A couple of hours later, when the email came in, she read the news. She had been accepted into Harvard’s summer program. “I was so excited; I couldn’t believe it!” she says, wearing a smile similar to the one she wore when she first opened the email.
Katherine is no stranger to the college experience. Currently, she is a sophomore at Middle College High School at Santa Ana College. She takes college-level classes during the day and spends her evenings studying at the Nicholas Academic Centers in downtown Santa Ana. She is also involved in a number of extracurricular activities, including mock-trial, which she wrote about in the essay she submitted with the application to the Harvard program. Katherine participated in a mock-trial competition, using evidence in various case studies to build arguments for the trials. Her group made it through four phases of the competition, winning verdicts along the way: “We didn’t win the entire competition, but we did well and won a couple of decisions while we were in it.” Katherine will be able to use this experience when she takes the summer seminar on Insanity Defense at Harvard.
The Harvard program runs from June 23 to August 10. Katherine will be a part of the NAC for three years when she leaves for Harvard in June. We wish her the best and know she’ll represent the NAC well!
Feb 29adminNo Comments