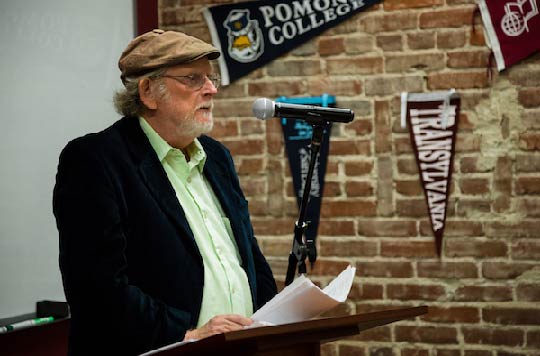 The Chapman Visiting Scholar Series for the 2017 Spring season kicked off on Saturday, February 18th at the Annex in our downtown Santa Ana site. Our guest speaker, Richard Bausch, is a Chapman University English Professor at the Wilkinson College of Arts, Humanities and Social Science. Bausch is most popularly known as an American novelist and a master of the short story form, having published twelve novels and eight collections of short stories. Writing as Freedom was the title of his lecture.

In attendance were 50 NAC scholars eager to learn about the art of writing. Bausch was calm and collected, reading passages from one of his books to the sea of students who were fixated on the gravity of the content delivered; he moved the crowd with the same influence the moon has on the tides of the Earth. His passages differed in length, the content spread out to captivate the minds in the room, and Bausch shared with scholars the atmosphere that he dwelled in during the writing of said story. Other readings were dense and heavy, leaving a vivid image in the students’ minds like the silhouettes that remain in sight after a bright object borrows the eyes of the beholder for a moment of intense visual stimulation, re-living the moment with every blink!

After setting the tone for that late morning, Bausch asked the students to finish off one of two prompts: 1) “If I had known it was her on the other side of that door I would have crawled across broken glass to get to her and open it.” 2) “Everyone thought Jane was stupid but did not know like me she had special powers.” The room then began roaring with the sounds of ball-point pens traveling across the lightly grooved tables. At mid-point, students began to gaze at the space in front of them, looking for the words to complete their story. Stories ranged from dense half-page content to material that spilled over to the back of the page. In Bausch’s words, “It doesn’t always take much to spark an idea.” Bausch was heartened that most of the submissions consisted of prompt number 1, as it involves a very mature way of thinking.”

After a brief lunch break, Bausch began reading the stories written by our scholars. It was interesting roaming through the mind of each student, through the thoughtful choice of words that completed each story. Bausch was impressed by the level of intellect, congratulating each writer in the room when he finished a story. In NAC Scholar Melody Fermin’s words, “He really explained that any idea could turn into a whole story simply by the way the author explains it.” The exercise came to show that any story could have the same beginning, but a completely different ending.