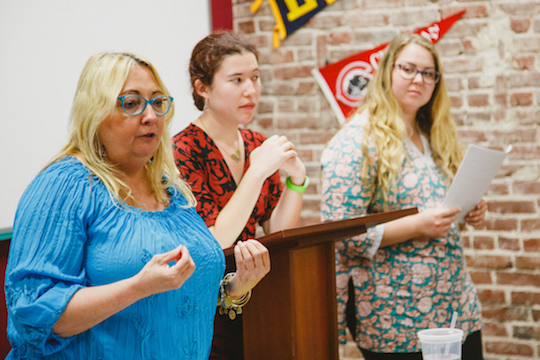 “We can test how you learn in a class by your scores, we can test your aptitude by the SAT’s. They’ve always said you can’t test heart, but with our kids you can test heart.” NAC Co-founder, Judge Jack K. Mandel, spoke highly of the 25 NAC Scholars who chose to extend their learning day by taking part in the first Chapman Visiting Scholars Series lecture of fall 2016 on Saturday, September 24.

NAC Scholars were very quick to note the “Snow White” decal on Julye’s computer as well as her Disney Aladdin-themed shoes, both fitting for the lecture. “So why study Disney and Harry Potter films at the university level?” Bidmead noted that it is very important to analyze these types of films as they reflect parallels with our society ranging from stereotypes to gender roles. An example she used for gender roles reflected typical Disney movie constructs revolving around a female figure patiently waiting for a male character to save the day. Students were quick to disagree on these stereotypical roles and added that nowadays these roles are shared, as both genders have always presented similar strengths, but are now becoming widely accepted as equal.

“We all have identity! We are not just part of one thing but instead are all different,” stated Julye, referring to the term Intersectionality. She added, “We might share an age group, ethnicity, or a gender, but those aren’t the only defining features one should abide by since ‘you’ have additional interests that define ‘you’ as a person. An Identity!”

Voices among the crowd described that this lecture, in a good way, “ruined” their childhood because they are now able to see past the entertainment component of any movie. NAC Scholar, Alfonso Navarrete, remarked, “These movies track the changes in society throughout time.” Although some of the stereotypes reflected in the presentation weren’t pleasureable to uncover, it was very important exposure as one has to “know” what the problem is before one can fix it. Our social fabric is constructed by major influences like Harry Potter and Disney, but the presentation did not aim to say that these two entities are the only ones misrepresenting aspects of one social handle. The lecture was constructed so that Scholars will be able to critically analyze any show or movie in popular culture and see how it fits into or examines societal values.