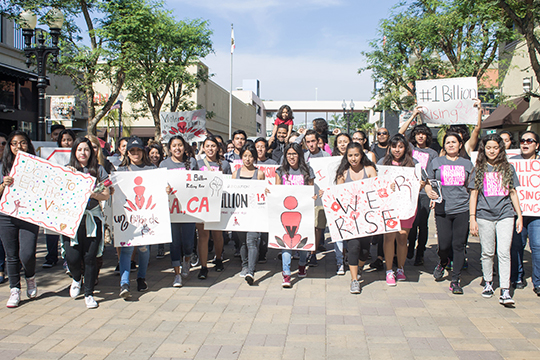 It wasn’t a typical Valentine’s Day in Santa Ana’s busy downtown. Chants demanding an end to violence against women echoed off the historic buildings, amplifying the message that was heard by surrounding spectators.  Besides their loud screams, scholars were very easy to spot, wearing charcoal-colored shirts with a bright pink message: “One Billion Rising, Santa Ana, CA.” Their mission, to march to the Yost Theatre in unison shouting, “I rise, you rise, we rise together” and to dance with purpose to David Guetta and Sia’s song, Titanium. Bystanders clapped, and participants posed for a group picture before heading towards the Gypsy Den on Broadway where they repeated the dance in front of a new crowd.
The One Billion Rising Revolution (OBR) launched on Valentine’s Day in 2012 due to a staggering statistic revealing that 1 in 3 women on the planet will be beaten or raped during their lifetime.  Since OBR’s inception, NAC scholars have been part of this global movement, raising awareness in their community. A great deal of preparation was needed, as organization was vital if the message was to resonate and manifest in the local community. Hours of rehearsal were spent on getting the flash mob prepped weeks before the demonstration.
On Friday, February 12, Diana Tercero and Carolina Tercero, NAC Directors of Academics, put together a One Billion Rising team building workshop that aimed to unite the participants. As part of the workshop, students created captivating posters on the Senior Patio of Valley High School to be displayed the day of the uprising, and they took part in a couple of icebreakers. After the icebreakers, flash mobbers gathered for yet another round of rehearsals before the end of the day.
In anticipation of the event, the NAC’s media club started a campaign on Facebook that asked participants why they were rising. Among them, NAC class of 2017 scholar and choreography leader, Erick Martinez, said that he rises “to raise awareness on unfair treatment.” NAC class of 2019 scholar, Rubi Medina, said she rises to “end the violence,” while Luz Rodriguez, a NAC class of 2018 scholar, says she rises “to stop injustice.”
The day of the event, February 14, participants met up at the NAC 1 Annex at 11 a.m. for rehearsal, and a small open mic event that allowed students to share a couple of short poems and stories. Students were able to enjoy bagels and coffee donated respectively from Bruegger’s Bagels on MacArthur and Fairview, and Starbucks on Bristol and MacArthur.
NAC Class of 2016 Cassandra Lopez added, “This event is very big for Santa Ana because, from our backgrounds, a lot of women are put through a lot. I’ve seen it and I’ve heard of it most of my life and it is very important for other people in Santa Ana to know about it.”
The NAC is committed to keeping students involved in community projects to encourage leadership in their community, whether on a local or global level, and the One Billion Rising campaign is just one of many events in which NAC students participate throughout the year.
Feb 14adminNo Comments