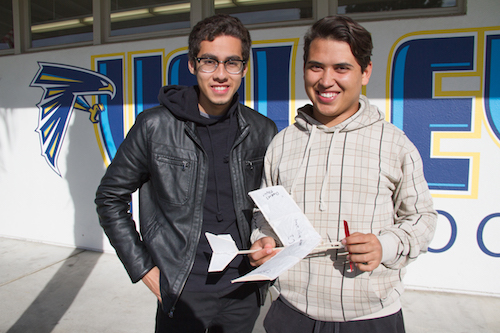 Two NAC scholars faced the challenge of creating a model airplane that was to meet or surpass the expectations of the judges at the 2015-2016 MESA Balsa Wood Model Airplane Contest. How did their approach to completing this challenge go? Not without turbulence.
NAC 2 scholar, Daniel Tapia, was left alone when his teammate changed his mind about joining the contest two weeks prior. Eager to find another partner, he quickly thought of the perseverant nature of Fabian Cuen, another scholar at the NAC. It took very little convincing to get Cuen on his team and they quickly started bouncing ideas off each other.
Soon enough, they had rough blueprints and a first model to test out. The results of their first run were disappointing. They persisted and created different versions, taking away the valuable aspects of each design, making each blueprint better than the one before.
It was during a late evening at Tapia’s garage when they had finished their 8th model. Eager to test their new plane, they ignored the consequences of testing in low visibility conditions and headed outside. Fabian spun the propeller, twisting the rubber band attached to it to create enough torque for take-off. When conditions seemed favorable, Cuen let go of the plane and they watched their creation reach new heights. “It was the best plane yet,” said Tapia! Having no control of the plane’s direction, however, they followed its course and watched helplessly as it landed on the neighbor’s roof. They politely knocked on the neighbor’s door and Fabian asked, “May we retrieve our plane from your roof? We were testing its flight and unfortunately it’s on your house.” The neighbor agreed, and they retrieved the plane for a second test run.
Fabian followed the same procedure and watched in astonishment a successful second trial. They followed the plane’s course once again and saw it fall on the street this time. They hurried towards the plane, but before they could retrieve it, a car ran over the right side of the aircraft. They cringed twice as they saw another car run over the same part of the plane and leave the scene. “We thought the plane was done for,” said Cuen. They picked up the plane and were surprised that it had survived, at least for the most part. They fixed the damage with some leftover balsa wood, tape, and tissue paper, and it functioned as though nothing had ever happened.
The day of the competition arrived and they were nervous, yet confident, that their plane would perform well. Planes small and large were being tested all throughout the contest grounds. Their confidence grew when they saw other test runs and model designs because the blueprints that the other contestants built upon resembled failures during the testing of Daniel and Fabian’s earlier models.
The two NAC scholars headed to an empty area of the park to test their plane before judging commenced. Happy with their runs, they headed back to the judging area. “I’m going to go to the bathroom,” Tapia told Cuen before splitting off in the opposite direction. As Cuen kept walking towards the judges, a piece of acorn fell from a nearby tree and pierced the right wing. The acorn had no problem penetrating the wing since it was mostly made from tissue paper. Eager to continue, Cuen headed back to their table where he began to repair the plane. As Tapia was walking back from his break, he was shocked to see Cuen fixing the airplane. Fabian explained the situation and they quickly made the essential repairs.
“Fabian Cuen and Daniel Tapia from Valley High School,” said one of the contest coordinators, calling the NAC Scholars to get ready for their official flight times. Fabian stepped up to the flight area and spun the propellers. He let go of the plane and they had a successful first run. After the plane landed, Fabian retrieved it and spun the propellers once again for a second run. Unfortunately, the second run was not as successful as the first and it made them uneasy. They were dependent on their last trial; luckily, it did not disappoint.
When the coordinators started announcing the winners of the contest, Fabian and Daniel were relieved that they didn’t hear the judges announce their name as the third place contestants. At this point, they were expecting either first or second place. They were extremely surprised when the judges announced the second place team. They wore huge smiles as they knew they were going to be the first place team. “Daniel Tapia and Fabian Cuen from Valley High School in Santa Ana, the first place winners of the 2015-2016 MESA Balsa Wood Model Airplane Contest.” Mission accomplished.
Mar 01adminNo Comments