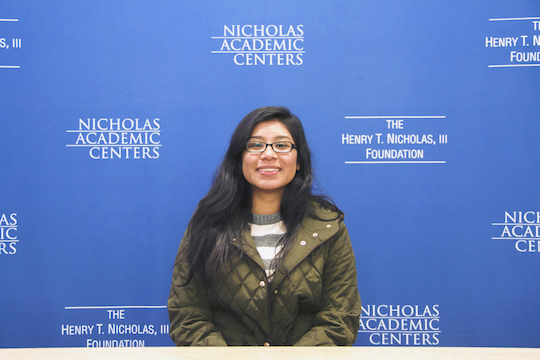 Class of 2011 NAC Alumna Eve Martinez has faced many challenges in life and has always found a way to succeed. She traveled 1900 miles to the small city of Galesburg, Illinois, home of Knox College. Eve quickly realized that her high school had not prepared her for the academic rigor Knox expected of its students. Regardless, Eve pulled through by finding inspiration through her mother and younger sister.
Eve was determined to focus on STEM so she centered her attention on Physics and Engineering.  Upon taking a mandatory chemistry class for her intended Physics major, she shifted her focus to the study of matter. Eve is part of the small percentage of Latina students who intend to focus on STEM, that fraction being 38%. That portion drops to 8% when comparing Latinas receiving any science related bachelor among all female college graduates.
It wasn’t until Eve’s junior year of college when Assistant Professor of Chemistry, Dr. Helen Hoyt, invited her to conduct research in synthesizing iron catalysts. It was in the course of this research that Dr. Hoyt introduced Eve to the idea of pursuing her doctorate upon graduating college. Shortly after working with Dr. Hoyt, Eve was accepted into the McNair Scholars Program, a very selective platform designed to prepare undergraduate students for doctoral studies. Eve ended up double majoring in Chemistry and Spanish from Knox in the spring of 2015.
Eve then applied to a series of Chemistry graduate programs around the nation, before accepting a full ride to Purdue University in West Lafayette, Indiana. She began her graduate studies at Purdue during the summer of 2015 where she will be focusing on Inorganic/Organometallic Chemistry under the supervision of Associate Professor of Inorganic Chemistry, Dr. Suzanne Bart. At Purdue, Eve will be part of the alarming fraction of Latinas obtaining their bachelors among all STEM doctorate degrees, that being only a mere 1%.
When asked what advice she has for current NAC Scholars, Eve Replied, “It is very easy to lose sight of your goals when you get caught up in the chaos of taking classes, working two jobs, participating in internships, etc. Many of us weren’t prepared for college, we didn’t go to the best schools in the nation like our college peers but that doesn’t mean you aren’t going to succeed. Above all, you have to want it and you have to put in the work.”
Jan 08adminNo Comments