Home / Academics / NAC Scholars Give Thanks for B ... 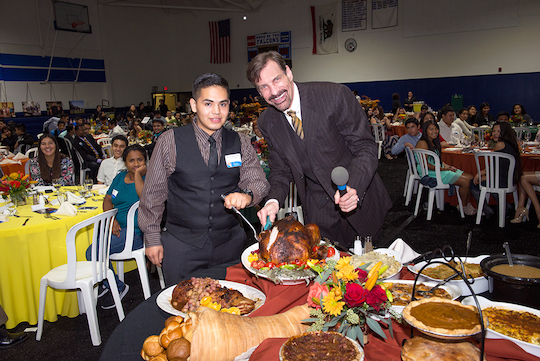 On Monday, November 23, the Nicholas Academic Centers hosted its 7th annual Thanksgiving Dinner celebration at Valley High School in Santa Ana. What originated as a small potluck in 2009 has evolved over the years into a grand and formal affair, complete with gourmet-prepared cuisine. Inside Valley’s transformed gymnasium, black carpet covered the hardwood court, tables were set with fall-inspired linens and fresh-cut flowers, and NAC memories colored several canvases that lined the walls. This year, more than 450 guests, made up mostly of current NAC Scholars and alumni, as well as community leaders, academic administrators and faculty, gathered together to build community and celebrate the growing legacy of NAC Scholars.
Upon arrival, guests enjoyed a variety of hors ‘d oeuvres, including quesadillas, meatballs, and spring rolls.  Although the appetizers were delicious, the highlight of the cocktail hour rested in the many reunions. NAC Class of 2010 alum and Wabash College graduate, Rudy Duarte, shared his excitement over seeing old friends: “Having events like these allows me to come back and reconnect with alumni that I haven’t seen, sometimes in years.” One of the evening’s featured speakers, Vicente Robles, himself a NAC Class of 2012 alum and current Pomona College student, also found comfort in celebrating with fellow alumni. Vicente noted, “This Thanksgiving dinner is a great way to come together as a community, give thanks, and share our experiences with other students. It’s a great bonding opportunity for everyone.”
After welcoming guests, NAC Co-Founder, Dr. Henry T. Nicholas, III, thanked NAC Scholars for working hard and proving that the Centers work. Citing impressive statistics of NAC Scholar successes in contrast to national averages, Dr. Nicholas remarked, “Not only are you guys clearly able to get in to some of the best universities, but our statistics show that you actually do better than the average student, or even gifted students that go to these universities.” Fellow NAC Co-Founder, Judge Jack K. Mandel, echoed Dr. Nicholas’ sentiments: “We found this wondrous trove of talent. With the proper focusing and honing and support, the practical tutoring and counseling, we make a difference.”
Noting how the impact made in NAC Scholars’ lives extends beyond the present, Dr. Rick Miller, Superintendent of the Santa Ana Unified School District, commented, “This is my 6th district and 27th or 28th year as Superintendent, and I have never seen anything like the NAC, fundamentally making huge differences for students and therefore for their families, both their current family and their family to come. It’s phenomenal.”
Mark Contreras, a Class of 2017 NAC Scholar, helped Dr. Nicholas carve the ceremonial turkey before inviting guests to enjoy a traditional-style Thanksgiving meal. Guests were also encouraged to take pictures at an open-air photo booth nestled in the corner of the room. Dressed in goofy hats, fake mustaches, and oversized heart-shaped glasses, NAC Scholars new and old squeezed alongside one another and posed for keepsake photos.
Following dinner, Class of 2016 NAC Scholars, Moses Alcantara and Monica Naranjo, took the stage. Moses, who mentioned that he never thought he’d find himself speaking on stage in front of so many people, discussed how NAC students who have come before inspire his perseverance and challenge him to try new things: “[At the NAC] I am surrounded by newspaper clippings of the NAC’s origins and the successes of its students. Reading clippings of people like Uyen Nguyen, one of the Judge’s Kids, makes me believe that I, too, will become an achiever.” Like Moses, Monica said she never imagined where this year would take her; however, moving forward, Monica has definite plans: “[Santa Ana] is my childhood and present; therefore, I want to be part of the team that fixes up the parks and neighborhoods,” adding, “I plan to use my knowledge of environmental sciences and come back to Santa Ana, to the city who raised me, and give back.”
The evening’s final speaker, Vicente Robles, explained that he proudly spent his entire academic career in Santa Ana before attending Pomona College. Vicente’s pre-college journey included stops at Carl Harvey Elementary, MacArthur Fundamental Intermediate, and Godinez Fundamental High School. Looking ahead, Vicente shared his vision of the future: “Now, I am a few months away from the end of the school year and I will be graduating. I will be finishing my bachelor’s degree in physics. After graduation, I plan on attending graduate school for a doctorate in engineering and eventually work as a scientist in the field of propulsion, developing the next spaceship to Mars.”
As the evening wound down, several guests passed again through the photobooth and captured moments on film to supplement the memories they made earlier in the evening, eating dinner with friends, and listening to the trials and triumphs of their peers. Looking back to the small Thanksgiving potluck in 2009, it is clear that the organization, like its annual Thanksgiving event, has grown. So long as NAC Scholars continue to establish themselves as an undeniable academic force, the celebration will go on, and likely on a larger stage.
Nov 25adminNo Comments