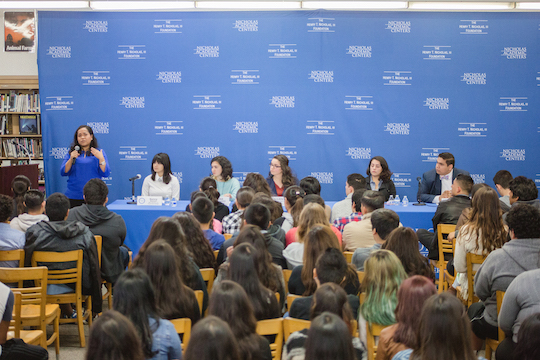 On Tuesday, December 29, more than 350 NAC alumni and scholars filled the Valley High School library to listen to a group of panelists at the 5th Annual Holiday Potluck & Alumni Panel. Some of the topics covered included managing money, adjusting to culture shock, and balancing academic and social life, to name a few. The gravity of the event was immense as current NAC scholars learned firsthand about college life from alumni who come from their same community. After the panel, students enjoyed a “potluck,” this year catered by a professional “taquero” and “elotero,” who also provided “raspados” and “churros,” popular foods in the local area. The event also allowed alumni to catch up with one another while sharing a good meal during the potluck portion of the event.
This year’s panelists included a wide range of NAC Alumni that have attended local state systems as well as private colleges across the nation. The panelists are as follows:
Alejandra Dominguez – NAC Class of 2014 – University of California San Diego
Ana Monjaras – NAC Class of 2013 – Humboldt State University
Abraham Rodriguez – NAC Class of 204 – Denison University
Fara Rodriguez – NAC Class of 2012 – Connecticut College
Nancy Roman – NAC Class of 2013 – Santa Ana College
The panel explored popular college topics and touched on some of the biggest concerns many high school students face while transitioning into college. “It’s okay to not know what you are doing and not know what your major is,” remarked NAC Class of 2012 panelist, Fara Rodriguez. Fara’s comment seemed to bring a sense of tranquility to the current NAC Senior class that has been busy finishing up private college applications on top of their typical high school duties. NAC Class of 2014 alum Alejandra Dominguez added, “Getting used to the rigor of college is a transition and I have had to figure all that out, plus you have other things to deal with.”
As the event unfolded, current NAC students in the audience were encouraged to ask the panelists questions. NAC Scholar Edgar Casarin asked the panel, “What keeps you going?” NAC Class of 2014 alum Abraham Rodriguez responded, “I ask myself, ‘Why am I the one to break this social standard? Why couldn’t people before me do it?’ But at the same time it just shows the satisfaction. I’m the one doing this, I’m the one that is going to make a better future for myself, so that’s what keeps me going.”
After the panel portion of the event, Class of 2016 NAC Scholar, Judith Carrillo, said she really enjoyed the panelists responses, noting, “Students showed not only their successes but also their failures and they were able to share their struggles of being a minority at their school.” Class of 2018 NAC Scholar, Abraham Simon, said the panel really cleared some of the fog surrounding college life. “At first I thought college sounds kind of hard, but as they started sharing how they got through it and all the things that happened to them, it was easier to take in. It’s not as hard as we think it is.”
View more pictures from the event below, or check out our gallery on Facebook HERE.
Watch a video recap of the event HERE.
Jan 08adminNo Comments