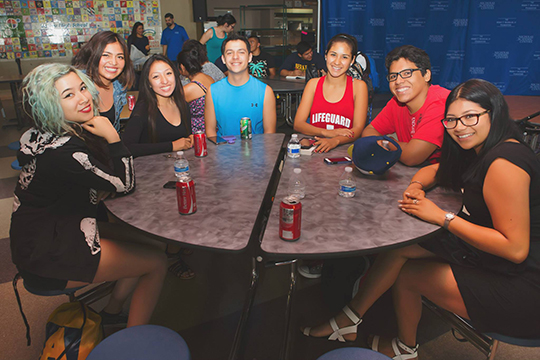 On Friday, June 26, Nicholas Academic Centers’ Scholars gathered at Valley High School’s “Club 59” cafeteria just outside of NAC 2, and for the second consecutive year spent the afternoon celebrating success, sharing stories, and eating freshly prepared tacos. During the event, NAC staff took turns speaking to the students who continue to defy statistics, congratulating them for what they’ve accomplished despite the odds, and wishing them well as they prepare to move forward with their educational journeys.
Rosa Diaz, NAC Director, opened her remarks to the graduating class by quoting German writer and statesman, Johann Wolfgang von Goethe: “Knowing is not enough; we must apply. Willing is not enough; we must do.” Rosa then encouraged students to not only go on to earn a college degree, but also to use the knowledge they gain to give back to their community. Rosa noted, “You have to take action; you have taken action and are moving on to college while many of your classmates are not,” before adding, “If you’ve ever thought you’re not special, surprise! You are!”
As a graduate of Santa Ana High School, Sandra Flores, a Higher Education Services Coordinator for NAC 2, saw herself in many of the students with whom she has worked. Sandra commented, “Given the obstacles you’ve gone through, you should all be very proud of yourselves.” Ivana Villarreal also touched on the new graduates’ accomplishments, stating, “It still hasn’t hit me that you all are leaving, and I don’t think I want it to. I just have to say that the Class of 2016 has very large shoes to fill.”
Class of 2015 graduate Nairurth Borath, who will attend UCLA in the fall, appreciated the Senior Day gathering: “I think the senior event was overall reassuring, knowing that I have a support system, which is the NAC. Also, the food was great.” Fellow graduate and future UC Irvine student, Celia Ortega, added, “I enjoyed it because it’s possibly the last time the seniors get to have a bonding day. Some of the seniors are going far and out of state and it’s a good way to get together one last time.” Finally, Yasmin Cruz, who will attend Cal Poly Pomona, noted, “It was really fun, especially being able to reunite with friends and the NAC staff. It should be a tradition every year!”
Before inviting students to play two thrilling (or more accurately, funny) games of Musical Chairs, Rosa Diaz and Fernando Martinez unveiled a new NAC t-shirt, which reads, “I’m a NAC Scholar – Santa Ana, CA.” Rosa challenged the college-bound scholars to “find the most exciting place to take a picture [while wearing the NAC Scholar shirts at college] and send it to us.”
Be sure to visit our website and follow our Facebook & Twitterprofiles to see those pictures as they come in.
Jul 02adminNo Comments