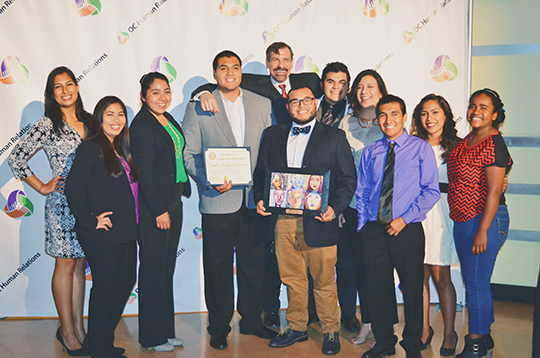 At the City National Grove of Anaheim on May 7, 2015, the OC Human Relations’ Awards 44 celebration “honored the outstanding human relations efforts of seldom-recognized individuals, model community policing programs and exemplary school programs that create safe and inclusive environments for Orange County’s students and residents” (OCHumanRelations.org). The Nicholas Academic Centers (NAC), honored “for supporting higher education for low-income students through mentoring and scholarships,” is proud to have been included alongside other local unsung heroes like Gloria Banks, the Bravo Family, De Colores Organization, Father Michael Mai Khai Hoan, and Farrah N. Khan, as well as Officer Jenny Lindsey of the Irvine Police Department and Savanna High School.
The ceremony, which celebrates “Justice, diversity, and the human spirit,” is an annual gala hosted by OC Human Relations, a non-profit organization founded in 1971 to “Build mutual understanding among residents and to eliminate prejudice, intolerance and discrimination.” To start the evening, the Awards 44 Ceremony opening speaker and OC Human Relations CEO, Rusty Kennedy, reflected on the organization’s mission and noted, “We bring people together at OC Human Relations, and together with all of you we can make the world a better place.” The idea of making the world a better place lies at the root of the Nicholas Academic Centers.
More than twenty years ago, now-retired Superior Court Judge and NAC Co-Founder, Jack K. Mandel, dedicated his time and resources to help Santa Ana students in need. Driven by his belief in the concept of “tikkun olam,” a Hebrew phrase that literally translates to “world repair,” the Judge mentored and tutored underserved students in a successful bid to help them get into, and graduate from, college. He did so because he believed in the mission, and his students absorbed the philosophy. Rosa Diaz, an original “Judge’s Kid” who now serves as the NAC Director, comments, “It’s an education issue, and it’s an equity issue. It’s about creating an equal opportunity for our students to have access to the same type of higher education as any other student. We want to be able to say, ‘No matter where you come from, you have an equal opportunity to access a college education.’”
In 2008, Broadcom Co-Founder Dr. Henry T. Nicholas, III partnered with Judge Mandel and launched the Nicholas Academic Centers, which are a part of a philanthropic network anchored by the Henry T. Nicholas, III Foundation. With Judge Mandel’s guidance and Dr. Nicholas’s financial support, the NAC has reached impressive milestones. For example, 95% of all our graduates in over seven years have enrolled in college directly after high school, compared to the national average 66%, according to the National Center for Education Statistics.
Following a video of NAC highlights, Dr. Nicholas took to the stage at the Awards 44 gala to accept the unsung heroes award for the Nicholas Academic Centers. In addition to thanking the OC Human Relations Commission for the award, and the entire NAC staff, Dr. Nicholas specifically thanked the “602 graduates of the Nicholas Academic Centers.” Dr. Nicholas noted, “95% of them are Hispanic, many undocumented, who managed – going through our program – to level the playing field and get admitted to Harvard, Georgetown, UC Berkeley, UCLA, Purdue, and Notre Dame.”
To close the ceremony, after a night of celebrating “justice, diversity and the human spirit,” James Lehmann of Partners Advantage quoted famed author and poet, T.S. Eliot: “What life have you if you have not life together, for there is no life that is not lived in community.” He also added, “Our vision and goal for year 45 is to continue to build a community that is safe, that is secure, and that is inclusive for all people to live in, to work in, to go to school in, and to do business in by embracing the beautiful mosaic of people that we are.”
Watch a PSA video put together by OC Human Relations HERE.
(Photo credit for group photo: OC Human Relations)
Jun 08adminNo Comments