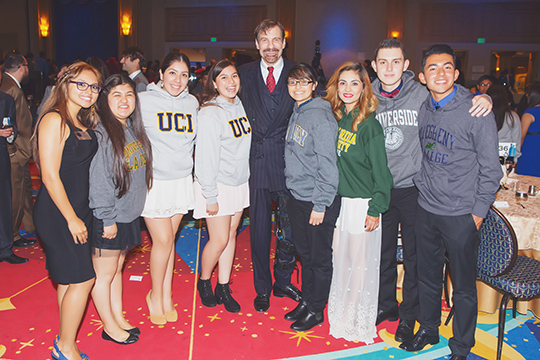 It’s that time of year, when finals mark the beginning of the end and seniors get set to walk in caps & gowns to the rhythm of Elgar’s “Pomp and Circumstance” while collecting their high school diplomas. On Saturday, May 30, at the Disneyland Hotel in Anaheim, 124 Class of 2015 NAC Scholars traded caps & gowns for college sweaters as they took center stage at the NAC’s 7th Annual Graduation Celebration. In front of nearly 800 family members, classmates, community leaders, educators and school administrators, our NAC Scholars became NAC Alumni. With each step they took across the stage, they moved one step closer to realizing their college dreams.
Because of their hard work and dedication, this year’s graduating class earned acceptances into nearly 90 colleges, including Harvard, USC, NYU, UC Berkeley, UCLA, and Vassar. As NAC Co-Founder & Financier, Dr. Henry T. Nicholas, III, mentioned during his opening remarks, “These are institutions that are the most sought after, the most prestigious institutions of higher learning.” Dr. Nicholas commended NAC Scholars for overcoming economic and cultural barriers and “crushing” the statistics for college admission and retention. Approximately 77% of the NAC’s Class of 2015 graduates will enroll directly into a 4-year university, compared to a national average of 38% and only 26% for Latinos, according to the National Center for Education Statistics. Overall, it is expected that 100% of Class of 2015 NAC Scholars will enroll in postsecondary education immediately after high school.
Just seven years after opening its doors, the Nicholas Academic Centers has extended its total number of NAC alumni to 602! More impressive than how many scholars have passed through the NAC’s doors and enrolled in college, however, is what these students are accomplishing once they get there. To date, our students baccalaureate degree completion rates in 5 years stands at 75%, versus a national rate of 55% and only 46% for Latinos, according to the National Center for Education Statistics. Dr. Nicholas noted, “There are detractors out there who say there are preferences, that the standards are lower if you’re Hispanic, which skews it. Well, it turns out there are no preferences for the grades that you make when you’re in college; that’s the real test. It’s when [students] go to college and it’s how well [they] do.” Rosa Diaz, NAC Director, echoed Dr. Nicholas’s sentiments: “At the end of the day, no matter where you come from, whether it’s 2nd & Bristol, whether it’s Harbor & Edinger, where some of our kids from NAC 2 are from, if you work hard and put your energy into it, you will outwork anybody.”
NAC Co-Founder, Ret. Judge Jack K. Mandel, talked about the impact the NAC’s students’ performance will have on their lives and the lives of their classmates and families: “The seniors are about to take their first steps into American colleges and Universities, and the juniors know that if those seniors can get in, so can they. Parents, this may be beyond your horizons at this point, but it will be very much a part of your family life, not just for the next four years, but for the next generation.”
City of Santa Ana Mayor, Miguel Pulido, presented NAC Co-Founders Judge Jack Mandel and Dr. Henry T. Nicholas, III with a Certificate of Recognition from the City of Santa Ana because of their contributions to Santa Ana and the students in the Santa Ana Unified School District. Mayor Pulido commented, “It has been my privilege to watch this [program] grow. Now, we’re not only seeing the benefit to the students, but to the community.” Mayor Pulido then presented five $1,000 scholarship awards on behalf of Faubel Community Partners, Rutan & Tucker Community Partners, and Communications LAB Community Partners to Class of 2015 NAC graduates Ana Karen Herrera, Cameron Fuentes, Ana Beltran, Nairuth Borath, and Lorena Ruiz.
Student speakers for the evening included Class of 2015 graduate Aileen Navarrete, who will attend Harvard in the fall, and Yerik Macias, who will attend USC. Both students were recipients of the Gates Millennium Scholarship, and both credited the NAC in part for their academic success, as well as the support they received from family, teachers, and counselors. Class of 2015 alum and recent Georgetown University graduate, Ana Rodriguez, also referred to the sacrifice parents make for the students’ benefit. Using her own experience of traveling far from home to pursue an education at Georgetown, Ana commented, “With no family in Washington D.C., I merely got a taste of what many of our immigrant parents experienced when they came to the United States. I realized that although this moment was difficult, it was nothing compared to hardships and sacrifice that our mamis & papis have endured to get us to where we are today.” Before concluding her speech, Ana challenged graduating NAC Scholars to write down their wildest dreams and internalize them to fuel their success. Ana reminded the graduates that while college is challenging, it’s not impossible: “Your hard work and commitment to your future will grant you experiences you can’t even fathom.”
Congratulations to our Scholars who have received scholarships:
Aileen Navarrete – Bill Gates Millennium Scholarship
Yerik Macias – Bill Gates Millennium Scholarship
Dayanara Angeles – $20,0000 – Avid Kingston Technology Scholarship
Itzel Sanchez – $20,000 –  Avid Kingston Technology Scholarships
Daisy Monjaras – $10,000 – Boys & Girls Club Scholarship
Maria Garcia – $10,000 – Heid Foundation Scholarship
Amy Villarreal – $1,000 – Difference Makers Scholarship
Maria Garcia – $1,000 – Difference Makers Scholarship
Ana Karen Herrera – $1,000 – Faubel Community Partners Academic Scholarship
Cameron Fuentes – $1,000 – Faubel Community Partners Arts Scholarship
Ana Beltran – $1,000 – Faubel Community Partners Most Improved Scholarship
Nairuth Borath – $1,000 – Rutan & Tucker Community Partners Legal Scholarship
Lorena Ruiz – $1,000 – Communications LAB Community Partners Journalism Scholarship
The Nicholas Academic Centers would like to thank the following companies and organizations for their generosity in awarding scholarships to our students:
Vanir Group of Companies
Faubel Public Affairs
Communications LAB
Rutan & Tucker, LLP
Watch a video highlight reel from the Graduation Celebration HERE.
Jun 08adminNo Comments