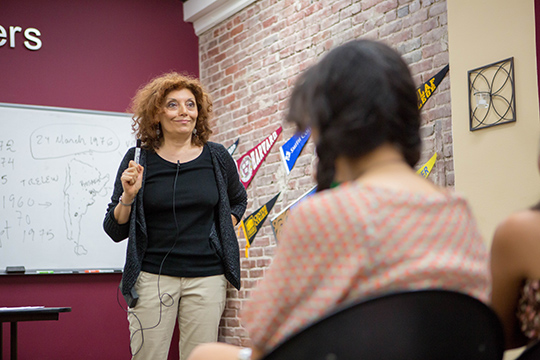 On Saturday, March 14, students of the Nicholas Academic Centers attended the last Chapman Visiting Scholars Series lecture of the 2014-2015 academic year. Professor Alicia Kozameh’s presentation, “Dictatorships in Latin America: Surviving & Writing the Experience,” informed students about political oppression in Argentina in the 1960’s and 1970’s, citing professor Kozameh’s personal experience as a political prisoner, which can also be found in the novels, short stories, and poems she has had published over the years. An accomplished author and speaker, professor Kozameh has given readings and lectures around the world to share her experiences and promote human rights. While introducing her before the lecture, Dr. Daniele Struppa, Chancellor of Chapman University, considered the significance of professor Kozameh’s presentation, stating, “Most teachers in college will look at what other people have been writing and discuss the meaning of that. Here, we have the opposite. Alicia Kozameh is an internationally known writer, and what she writes is translated into many languages; there are entire classes in universities around the world where people talk about what she writes.”
Born in Rosario, Argentina, in 1953, Alicia Kozameh was aware of her sensitivity to social inequity at a young age. When she was still a child, another child asked if he could have her ice cream. Confused as to why he could not buy his own, professor Kozameh asked her mom. “Because he can’t afford it,” her mom answered. Professor Kozameh grew uncomfortable and she began to wonder why some kids could afford ice cream and others could not. This sensitivity, she notes, led her to advocate for others, and it has stayed with her as a writer.
In many ways, the discomfort professor Kozameh felt over the ice cream incident was a microcosm of the political scene unfolding in Argentina in the 1960’s and 1970’s, and tensions were rising between an increasingly repressive government and the body of people it represented. Professor Kozameh noted the assassination of several activists in Trelew in 1972 led to even wider political unrest across the country. Over the next couple years, as the situation worsened, many people were killed and arrested for political reasons.
During her time in college, professor Kozemah joined a group of people who spoke out against the government. In 1970’s Argentina, joining such groups was not safe. On September 24, 1975, police arrested professor Kozameh, her companion, and several others in similar groups.
On March 24, 1976, a military “junta,” or committee, overthrew the government and extended the country’s political repression. For political prisoners, the coup d’état in Argentina marked a significant shift from bad to worse. Professor Kozameh stated, “On this day, if we still had food to eat or people visiting day, all that stopped; all the political prisoners became very isolated from society.” According to professor Kozameh, police would often “transfer” prisoners from one prison to another, but officers would kill the prisoners along the way and claim that they tried to escape.
Eventually, professor Kozameh was transferred with nearly 1,200 other female political prisoners in Argentina to a prison called Villa Devoto, located in Buenos Aires. Under pressure from groups like the Red Cross, Amnesty International, and United Nations, the Argentinian government concentrated the prisoners into a facility more suitable for showcasing prison conditions to a national audience. Villa Devoto looked nicer than many of the other prisons, but the upgrade was minimal.
On December 24, 1978, three years and three months from the day she was arrested, professor Kozameh was released from prison; however, even her freedom remained “under surveillance.” For six months, professor Kozameh had to check in every month to show she had not left the area. When six months had passed, professor Kozameh received threatening notices to get out of the country, but ironically, the same government who sent the notices would not provide the passport she needed to leave. She did eventually get a passport, and in 1980, with help from a friend who worked for a travel agency, professor Kozameh journeyed to California.
As a legal refugee, professor Kozameh spent the next year living with a wealthy family in Pasadena. While there, the woman of the house gave her a desk, a typewriter, and paper so that she could write poetry. She also began writing her first novel. When her companion from Argentina was freed from prison and able to join her in California, professor Kozameh left Pasadena and got married. The marriage did not last, but the memories of her experiences in Argentina persisted, and so professor Kozameh began writing her second novel, this time about her life in prison. Before publishing the book, Pasos Bajo El Agua, or Steps Under Water, professor Kozameh returned to Argentina. Unfortunately, political forces threatened her once again, and professor Kozameh returned to California.
Toward the end of her presentation, professor Kozameh passed around journals that she wrote, as well as crafts she created, during her time in prison. When she was released from prison in 1978, she was not allowed to take the notebooks she had written, but she took risks and snuck them out in pieces, disguising them as letters and even stitching small folded pieces into her sandals. Students were able to hold in their hands the drawings and text that came out of professor Kozemah’s experience. These notebooks are significant and have been written about by other scholars. In closing, professor Kozameh told the students, “When you publish a book about your own experience, this kind of experience, it applies to [other’s] experiences. So, they see themselves in the book, and by informing the audience, the readers, about your experience, you are also informing them about the rest, the larger experience.” This is one experience they won’t soon forget.
(Click HERE to see the full photo album on our Facebook page.)
Mar 30adminNo Comments