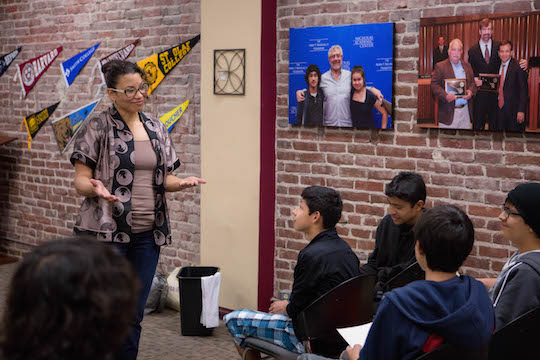 “Inhale. Exhale. Inhale. Exhale.” Raising her arms to the ceiling in unison with the 30-plus students in attendance, Dr. Kimberly White-Smith, Associate Dean, College of Educational Studies, opened the first Chapman Visiting Scholars Series presentation of 2015 with a simple, yoga-inspired breathing exercise designed to jumpstart students’ brain activity on an early Saturday morning. In one of the most interactive Chapman lectures to date, Dr. White-Smith’s presentation, “What’s In A Label? My Life In Stereotypes,” involved students in a number of activities and challenged them to reflect on their understanding of stereotypes and the impact stereotypes have on their lives.
Giving no more than her appearance and a brief background on her college education, Dr. White-Smith asked students to break into groups and write “the story of her life,” including details on where she grew up, who her parents are and what work they did, whether or not she’s married and has children, and so on. After scripting what they imagined to be Dr. White-Smith’s life, students shared their lists while the professor wrote everything down on large Post-Its place on the walls around the front of the room. Few groups could agree on Dr. White-Smith’s ethnicity, while several assumed she has one or more children and comes from a lower to middle-class socio-economic background. After Dr. White-Smith revealed that she identifies herself as African-American, and that she and her foster-brother were adopted and raised by an older couple, students admitted that they felt “weird” making a conscious effort to label her based on little more than the biases they didn’t even realize they had developed. Students also noted that they were afraid to share some of the items on their lists in case the items were offensive, which in turn might leave them open for judgment.
Dr. White-Smith addressed the students’ feelings about judging others, saying, “This innate thing we do as human beings, to know people, to figure people out, this curiosity that we’re just born with, is natural.” Noting how natural curiosity can be misused, Dr. White-Smith continued, “It’s [bad] when we take those particular desires and turn them into something that causes other people obstacles and pain. It’s the idea of stereotyping people, putting people in little holes and pegs and boxes, and not allowing them the freedom to at some time in the future walk out of that box. That’s when it becomes a problem.”
During the second half of the presentation, students were asked to write a list of times in their lives that they either felt stereotyped or had stereotyped someone else. Then, after discussing the impact these stereotypes can have, Dr. Kris De Pedro, Assistant Professor, College of Educational Studies, invited students to create a journey map to tell the stories of their lives using simple illustrations. Some students, like Class of 2017 NAC Scholar Marc Contreras, shared their stories with the audience. Marc talked about how he had experienced domestic violence at home and made bad decisions, which caused several people to label him early on as a gangbanger with little to no hope for the future. Eventually, however, Marc became involved with a youth shelter and began to take his education seriously, eventually finding his way to the Nicholas Academic Centers. Class of 2018 NAC Scholar Krystal Hernandez also appreciated the activity, noting how “it helped to explain or share with other people how stereotypes can really affect someone.”
An advocate for public schooling, Dr. White-Smith closed the lecture by noting, “I definitely think that education is a map to get anybody anywhere they want to be in life.” Dr. White-Smith explained that despite the labels people will put on the students as they move forward with their education and lives, people cannot take away the knowledge and power the students will gain through hard work, determination and perseverance.
Mar 03adminNo Comments