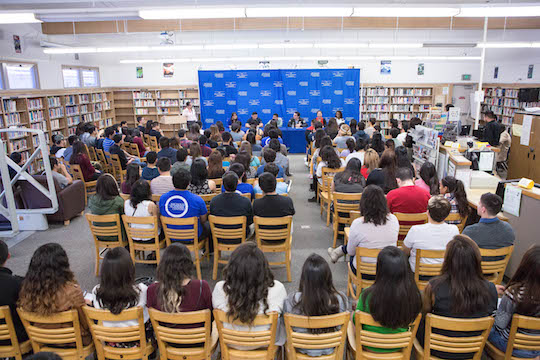 On December 22, 2014, nearly 150 students started their holiday break by attending the NAC’s 4th Annual Alumni Panel & Potluck at Valley High School in Santa Ana. For the fourth consecutive year, alumni returned to address several college-related topics, including adjusting to culture shock, earning and saving money, coping with home sickness, and learning to balance academics with campus involvement and time with friends. One of the panel’s best features rests in the direct access it offered current NAC Scholars to the firsthand experiences of alumni who have found a way to successfully transition from Santa Ana to top-ranked schools across the United States. Another bonus, of course, was that after the panel, students enjoyed a “potluck,” this year catered by a professional taquero. The potluck portion of the event also allowed alumni to catch up with one another while sharing a good meal and participating in friendly (and sometimes ultra-competitive) games, like Musical Chairs.
This year’s panelists included a wide range of NAC Scholars, including Class of 2013 NAC Scholar Erika Simon (at Santa Ana College), Class of 2010 NAC Scholar Daniel Arambula (at CSU Fullerton), Class of 2011 NAC Scholar Jose Tizol (at CSU Fullerton), Class of 2012 NAC Scholar Mark Piñon (at UC Davis), Class of 2011 NAC Scholar Ana Rodriguez (at Georgetown University), and Class of 2013 NAC Scholar Erin Davis (at Birmingham-Southern College). Having attended colleges from the local state system to private colleges across the nation, panelists had enough experience to answer most of the current students’ questions with authority.
Among the many topics the panel explored, the subject of seeking help when needed—in academics and on a personal level—appeared to have a profound impact on those in attendance. The NAC, in its holistic approach to working with students, places heavy emphasis on social services to help students navigate the challenges they face inside and outside the classroom. Class of 2013 NAC Scholar Erin Davis encouraged students to find supportive people while in college: “Everyone thinks they can hold it together because it’s college, and you’re supposed to be mature and ‘get’ everything, and sometimes you just don’t.” Her voice cracked with emotion, Erin continued, “If you don’t feel like you have it all together, go and see someone.” Rosa Diaz, Chief Officer of Operations & Programs, added, “Always ask for help because people are there to help you at the college level. Whether you are in a school system that’s small or big, there are counselors, there are teachers…or even just a classmate.” In an effort to continue helping students, the NAC provides ongoing access to all NAC services for students in college.
Most of the panel’s conversation revolved around balancing time and saving money, with each panelist offering a unique strategy to get through unexpected financial hardships. Class of 2010 NAC Scholar & alum Daniel Arambula recommended saving up small amounts of money from each paycheck (for those who work) and living as though the savings do not exist, while Class of 2011 NAC Scholar & alum Ana Rodriguez suggested that students use a banking system that limits the amount of money they are able to withdraw from the bank each month. Ana noted that the risk of embarrassment from having a card rejected while trying to pay for dinner with friends is incentive enough to keep a tight watch on her budget.
Before closing out the panel and inviting students to reconvene outside the library for tacos and games, Maria Cortes, Director of Higher Education Services, thanked students for attending event and she reminded them to keep striving for success: “I think it’s just so great that all of you are breaking a mold that we have here; all of you are courageous, you’re going out to college, and you’re making things happen for yourself.” Maria continued, “So, whether you’re on your way out if you’re a current senior, or if you’re a current freshman, or whether you’re an alumni representing the Centers everywhere you go, just know that we are all so very proud of you, and we’re very excited that you’re here.”
Click HERE to visit the full photo album on Facebook.
Jan 25adminNo Comments