Home / Academics / NAC Students Rise for the One ... 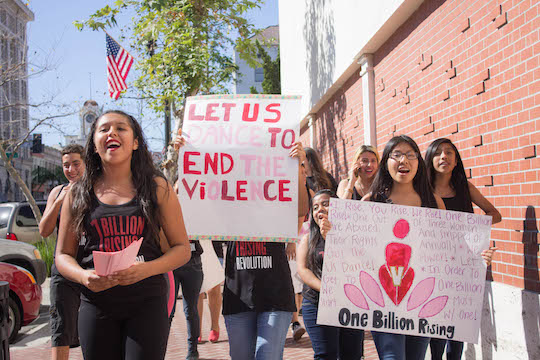 NAC Students Rise for the One Billion Rising Revolution

More than two months before the bass-driven beats of R3hab’s “Revolution” echoed off the walls outside the Yost Theater and Gypsy Den in downtown Santa Ana, before 30-plus students and mentors gathered and danced in front of unsuspecting spectators in each of these locations, and before chants of “OBR” competed with and eventually overtook the bustling city sounds of 4th Street, students and staff at the Nicholas Academic Centers began spreading the word and facilitating workshops on human trafficking & slavery, all in preparation for a revolution, a campaign to end violence against women around the world, a movement known as One Billion Rising.
For the third consecutive year, NAC students spent Valentine’s Day raising awareness and fighting for justice for women everywhere. The NAC’s involvement in the One Billion Rising campaign is part of a global grassroots movement organized to give voice to marginalized communities, using song, dance, signs, and rallies to make positive change happen.
In anticipation of this year’s event, the NAC’s Media Club launched a social media campaign and shared students’ reasons for rising. Class of 2015 NAC Scholar Harvey Sanchez declared, “I rise because I believe that we should treat others the way we want to be treated.” Class of 2016 NAC Scholar Hector Ibarra added, “I rise because I believe all women should always be treated with respect.” Amber Rivero, a Class of 2014 NAC Scholar who currently attends CSU Channel Islands, also reported, “I’m doing this to inform people to be a voice of those who have none, to spread the word on what women go through around the world and… I rise to break the chain of violence for those who don’t have a voice so that one day they will.”
On the day of the event, guest speakers from Live2Free, an organization that “exists to challenge a generation to make personal choices that recognize the dignity of the individual… and to network with others to rescue, rebuild and restore broken lives of victims worldwide,” talked with NAC students and shared information on how to recognize, avoid and report potentially dangerous behavior and situations.
Following the guest speakers, students practiced their dance routine in the alley behind NAC 1 before taking up their signs and marching down 4th street toward their first stop, the Yost Theater. Spread out in several rows across the plaza, the student-led flashmob performed a meticulously choreographed dance. According to Vianey Martinez, a Class of 2017 NAC Scholar who helped teach the dance to the other students, “The movements all have some sort of purpose. We didn’t just dance to dance. The movements represent different actions that we can take, and I think that’s really cool. It’s really powerful.” Those who didn’t dance handed out flyers with information about the One Billion Rising campaign. After the last notes of the song faded, spectators applauded the performance, and the group marched back towards Broadway to the Gypsy Den and performed the dance once again.
The NAC is committed to keeping students involved in community projects to encourage leadership in their community, whether on a local or global level, and the One Billion Rising campaign is just one of many events in which NAC students participate throughout the year.
Thank you to Jeffrey Gothard of the SAUSD and Channel 31 for interviewing participants & sharing a video of the story (which you can view HERE).
Mar 03adminNo Comments