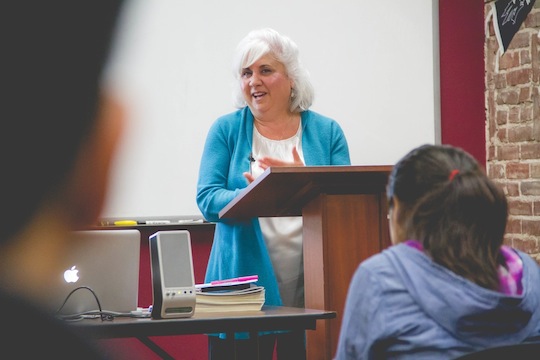 On Saturday, November 15, NAC students attended the last Chapman Visiting Scholars Series presentation of 2014, featuring Associate Professor Cristina M. Giannantonio, of the George L. Argyros School of Business and Economics. During the first part of her presentation, Dr. Giannantonio reviewed organizational behavior and the topic of extreme leadership, looking specifically at Sir Ernest Shackleton’s famous Imperial Trans-Antarctic Expedition, also known as the Endurance Expedition (1914-17). For the second half of the presentation, Dr. Giannantonio challenged students with a subarctic survival exercise.
Dr. Giannantonio opened the lecture by distinguishing Organizational Behavior from other fields of study, especially under the business domain: “A lot of business classes are very focused on ‘X,’ meaning we solve for ‘X.’ What was the return on investment? How much profit did you make? What’s our market share? They’re very focused on ‘X,’ but in Organizational Behavior we focus on ‘Y’ (or “why”). Why did someone do this? Why did a person behave this way? Why was this company successful?” According to Dr. Giannantonio, Organizational Behavior, as a field of study, focuses particularly on leaders and leadership. Organizational Behaviorists look at the traits and behaviors leaders share to try and discover why some leaders are more effective. Dr. Giannantonio stated, “What we’ve learned over many years is that you can’t take a leader, one model of a leader, and just plug them into every situation. The appropriate behavior or leadership style is going to be a function of the situation that leader encounters.” The challenge rests in figuring out what about each situation is important to understand.
Realizing that success in leadership is dependent on contextual variables, Dr. Giannantonio began to study leadership styles in extreme situations. Dr. Giannantonio defined an extreme situation as anything that falls outside the norm, or outside the scope of one’s daily experience. The definition falls right in line with the world of polar explorers. During what is known as the Heroic Age of Antarctic Exploration, during the years 1897 and 1922, 19 explorers died in 17 expeditions spanning 8 countries. Dr. Giannantonio’s lecture included an overview of three explorers who “raced” to be the first to reach or explore the Antarctic, including Roald Amundsen, Robert Falcon Scott, and Ernest Shackleton. Shackleton is best known for surviving the three-year Imperial Trans-Antarctic Expedition, during which Shackleton traveled 720 nautical miles in a lifeboat to rescue his crew after their ship, Endurance, was lost to pack ice early in the trip.
During the second half of Dr. Giannantonio’s presentation, students and staff participated in a subarctic survival exercise. Students were told to prioritize a list of survival items, such as wooden matches housed in a waterproof container, and then asked whether they would stay or leave an isolated crash site in a snowy, rugged terrain. Because Organizational Behavior is often studied at three levels, including the individual, group, and organizational levels, Dr. Giannantonio’s subarctic survival exercise looked at outcomes based on individual decisions versus group decisions. Students first worked alone, and then in groups, to measure their chances of success surviving freezing temperatures with limited supplies and rations. Most students chose to attempt to leave the hypothetical crash site to find help, which proved to be “an almost certainly fatal decision,” according to a survival expert presented in a video that accompanied the exercise. In prioritizing the list of survival items, students’ results more closely matched the experts when the students worked in groups, an outcome that Dr. Giannantonio predicted based on previous studies.
Class of 2017 NAC Scholar Gabriel Piñon felt the lecture was perfectly suited for high school students: “The fact is that we are in school and we are pushed to be leaders, or leaders of the future. A lot of times [we’re encouraged] to be leaders, and sometimes we don’t know how, and this is a really good subject for the Chapman lecture.”
Dec 18adminNo Comments