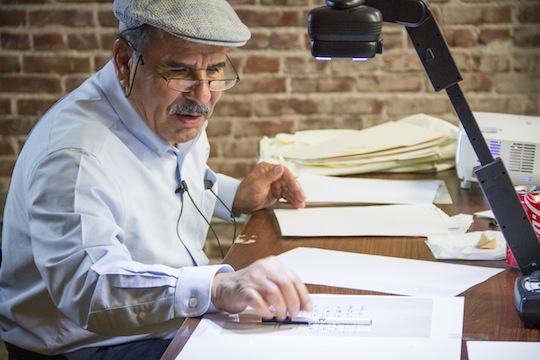 “There’s math in your culture, you know? You have math in your blood.” Like Jaime Escalante in a scene from Stand and Deliver, Dr. Luis Ortiz-Franco connected his audience to the subject of his presentation, “Pre-Hispanic Mathematics and Culture in Mesoamerica.” The lecture, which is part of the Chapman Visiting Scholars Series, introduced Nicholas Academic Centers’ students to ethnomathematics, the study of the cultural dimensions of the teaching and learning of mathematics. Specifically, Dr. Ortiz-Franco’s presentation focused on the cultural and mathematical contributions of three Mesoamerican civilizations: The Olmec, the Mayas, and the Aztec.
Although scholars continue to debate Olmec influence on other Mesoamerican cultures, many maintain that the Olmec, identified by some as the Zoque, were the first major civilization in Mexico. Of their many contributions, one of the most notable is the development of the concept of zero. Although other civilizations also developed the concept of zero, independent of the Olmec, Dr. Ortiz-Franco cites the Olmec as having been the first in Mesoamerica. According to Dr. Ortiz-Franco, “The Olmec were the first civilization in Mesoamerica, the first people who came up with a very clever idea, that clever idea of zero.”
Dr. Ortiz-Franco noted that Mesoamerican societies used their mathematical knowledge to great effect, creating calendars, designing architecture, and even building roads. Without the use of advanced technology, early Mesoamerican civilizations also tracked movements of the moon, stars, and planets. Dr. Ortiz-Franco remarked that between the three separate civilizations, the Aztec were the least developed because their domination in Mesoamerica lasted only 200 years, whereas the Olmec and Maya civilizations lasted much longer; however, each civilization offered notable contributions, including unique systems for counting.
After teaching each of the three Pre-Hispanic numerical systems, those of the Olmec, Maya, and Aztec, Dr. Ortiz-Franco challenged students to work in groups to solve a series of increasingly difficult equations. Several students shared their excitement about learning a “new” mathematical system. NAC Class of 2015 scholar, Javier Hernandez, stated, “I actually feel like I could do this by myself; I am going to tell my teachers…and see if they can solve some questions [using Mayan numbers].” NAC Class of 2018 scholar Belerofonte Mar added, “I got out of this presentation a whole new way of learning mathematics, and some background about Mesoamericans and their culture.”
Before closing his presentation, Dr. Ortiz-Franco encouraged students to continue working towards achieving their goals: “Just remember, whatever you want to do, you have to work hard, and erase from your vocabulary, ‘I can’t.’” Dr. Ortiz-Franco added, “You always can, you give it your best, you try, you work hard, and you’ll be just fine.”
Nov 05adminNo Comments