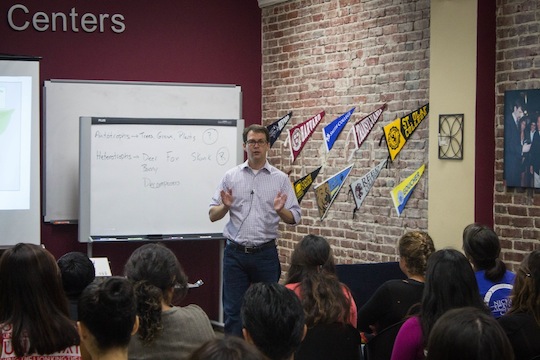 The Chapman Visiting Scholars Series returned to the Nicholas Academic Centers on Saturday, September 27, with Dr. Jason Keller’s presentation, “Everything You Need to Know About Environmental Science (in Two Simple Reactions).” Alongside Dr. Keller, nearly 40 NAC students explored two simple bio-chemical reactions — photosynthesis and respiration — to understand how they influence a number of environmental issues ranging from ecosystem carbon cycling to climate change.
After sharing the equations for photosynthesis and respiration, Dr. Keller challenged students to use carbon dioxide (CO2) measurements to figure out which type of organisms were hidden in three mystery boxes. Students created line graphs to monitor the patterns of CO2 concentrations measured in the boxes over time.
Before students could guess the mystery organisms, they had to understand the difference between heterotrophs, such as omnivores and detritivores (decomposers) who gain their energy by consuming other organisms (or decaying organic matter), and autotrophs, such as plants that use an external energy source like the sun to produce their own organic matter. Students learned that heterotrophs produce carbon dioxide through respiration while autotrophs consume it through photosynthesis, though they also respire. Dr. Keller noted, “If you leave here today understanding that every single cell needs to respire, and that includes plants, you will know more about ecology and environmental science than something like 95% of the world.”
Using their line graphs, students correctly guessed that box “A” housed a plant as CO2 levels went down. Because CO2 levels went up in box “B,” students correctly guessed the box contained a heterotroph, which turned out to be a handful of millipedes. Given that the CO2 levels also rose in box “C,” students were surprised when Dr. Keller revealed a plant similar to the plant kept in box “A.” How did this happen? Students soon discovered that box “C” was wrapped in aluminum foil, which did not allow the plant to take in light, thus leading to increased respiration and a higher CO2 concentration.
Dr. Keller then focused on how photosynthesis and respiration matters on a global scale, examining various ecosystems, including forests, urban areas, and wetlands. Dr. Keller looked at the role of industrialization and burning fossil fuels in the rapid rise of carbon dioxide concentration over the last fifty years using an often-cited Atmospheric Carbon Dioxide chart. Dr. Keller also considered the role of wetlands, which store 30% of all the soil carbon in the world. According to Dr. Keller, “If something happens that stops photosynthesis in wetlands, now suddenly they’re not taking up any CO2, and the world gets warmer.” Based on his own research, Dr. Keller estimates that by the year 2100, warmer weather will affect wetland areas, which in turn will release more CO2 and methane into the atmosphere, increasing greenhouse gases as well as global temperature.
With an infectious enthusiasm, Dr. Keller told students, “One of the things I enjoy about teaching environmental science, in particular, is finding connections between different ideas, and one of the things I find really exciting about being a scientist is that the more you understand the way the world works, the more you see these connections between different things where you didn’t think there should be any connections.” Considering the numerous effects of two simple reactions, NAC student Karina Trejo shared her surprise: “I learned that with the equation of photosynthesis and respiration, we [can learn] about our environment and our ecosystem and how it affects the whole world.”
Oct 12adminNo Comments