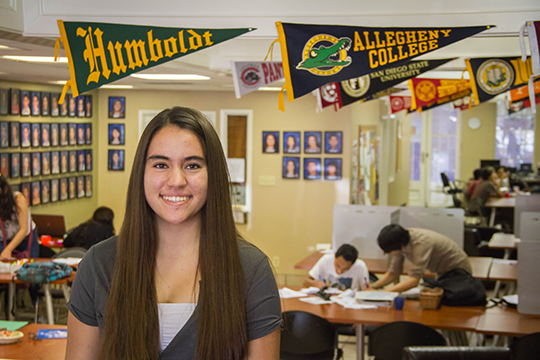 From Junior to Freshman, Karla Atcheson Gets an Early Start

Most high school students in the United States take an average of six classes per year and graduate in four years. Karla Atcheson, a Nicholas Academic Centers’ (NAC) Class of 2014 graduate, is not like most high school students. During her freshman and sophomore years at Fullerton Union High School, Karla took seven classes, including several Honors and AP courses, and increased her academic workload to eight classes during her junior year, all while maintaining an un-weighted 3.9 GPA. Soon, she will spend what would have been her senior year in high school at Allegheny College in Meadville, Pennsylvania.
Toward the beginning of her junior year, Karla visited the NAC in downtown Santa Ana, and she decided to join.  “I was enrolled in eight classes,” Karla said, “and I found that the NAC was the best thing to happen to me when it came to managing my workload.” Monday through Thursday, Karla attended the NAC and took advantage of having access to the tutors and a place to study. “I had a goal every day to finish all of my homework by 7:00 PM (when the NAC closes), so that I could go home and have some sort of life. With the lack of distractions and the help of the tutors, I met that goal every day.”
Like other competitive students, Karla supplemented her academic workload with an extensive list of extracurricular activities and clubs, including the National Honor Society and the California Scholarship Federation, the Water Polo and Swim team (until she found out she is allergic to chlorine), and Jazz Band. Karla also participated in various community service projects.
The idea of graduating early from high school materialized during Spring Break, when Karla had a conversation with NAC Co-Founder, Retired Superior Court Judge Jack K. Mandel. Judge Mandel informed Karla of the possibility of bypassing her senior year to attend Allegheny College in the fall, but he also emphasized that she could likely attend an ivy-league school if she stayed behind to finish high school. Karla weighed her options and ultimately decided to leave early for Allegheny.
In order to earn her high school diploma before going to college, however, Karla had to enroll in the district continuation school and complete two courses, English and Government, in just six weeks. Karla noted, “About three weeks into the summer, I successfully completed government; however, that left only three weeks to finish a year’s worth of English.” Averaging four hours of sleep per night, Karla “was stuck to [her] laptop working on English from morning to night.” She kept a pace of completing 4 units per week. Karla adds, “Typically, each unit required a different book to be read.” Karla pictured herself in college to help work through the units.
At Allegheny, Karla plans to major in Biochemistry, a recommended major for a Pre-Med student. “I chose Allegheny because of its prestigious Pre-Med program and because of its small size. I wasn’t very interested in going to a large school where it would be difficult to get one on one assistance and attention.”
Karla will be the first in her family to attend college. Though her parents did not attend a university, they know and appreciate the value of an education. Karla cites her parents as a driving force behind her success, and she is grateful for their support.
Aug 14adminNo Comments