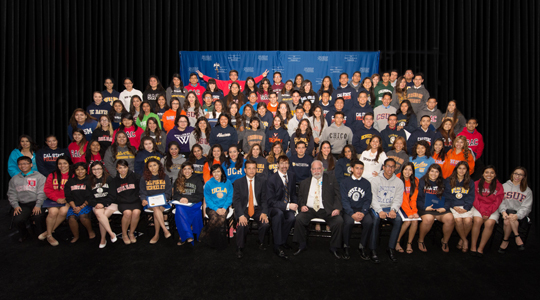 We’re proud to announce that we have successfully graduated another wonderful class of Nicholas Academic Centers’ Scholars! On Saturday, June 7, at the Newport Dunes Waterfront Resort & Marina in Newport Beach, the NAC celebrated the graduation of 124 students, which brings our total number of NAC graduates to 478! Of these graduates, 77% are heading to 4-year universities and the other 23% will be enrolling in 2-year colleges. More than 700 people attended this year’s celebration, including students, siblings, parents, school officials, teachers, and counselors, as well as several elected officials from around Orange County, including Santa Ana city officials.

2014 marks the 6th year that we have celebrated the accomplishments of the NAC graduates.  Over the last six years we have been incredibly lucky to work with hundreds of young women and men from the Santa Ana Unified School District and neighboring communities.  We have begun to see the larger community impact of our work as our alumni begin to graduate from colleges like UC Berkeley, Cal State Fullerton, Wabash College, Hampshire College, Colgate University, Morningside College, and Georgetown University, to name a few.

Returning NAC alumnus Genesis Luviano attended the event in support of her sister, Gaby, who graduated this year. “The Nicholas Academic Centers provided me with experiences that I would never otherwise have had the chance to have. For this I am extremely grateful,” she said. Genesis Luviano graduated from Smith College in Massachusetts this year and will start work in Brazil as a Fulbright Scholar early next year.

Mariana Hernandez de Vicenzo, who graduated from the NAC in 2010, went on to complete her degree at Georgetown University this spring. “This experience has completely changed my life,” she said. “Like many [NAC students], I was the first in my family to go to college, but most definitely not the last.”

“These students are going to be the leaders of their generation,” said NAC co-founder Judge Jack K. Mandel (ret.). “Colleges are competing against each other to get these students, and I’m so proud of them.”

← NAC Seniors Celebrate Their Successes at the NAC’s 1st Annual Senior Day
→ From Junior to Freshman, Karla Atcheson Gets an Early Start