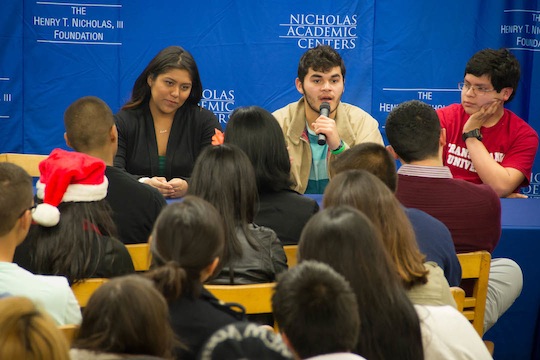 On Friday, December 20, over 70 NAC students filled the library at Valley High School to listen to a panel of NAC alumni at the 3rd Annual NAC Holiday Potluck and Alumni Panel event.
The returning alumni, many of whom are first-year college students attending a diverse range of colleges, including Cal State East Bay, Hope College, Transylvania University, Birmingham-Southern College, UC Riverside, and Cal State Fullerton, talked to students about how they dealt with academic challenges, culture shock, homesickness, and financial issues while navigating their way through college.
On the topic of addressing academic challenges, NAC Class of 2013 alum, George Rodriguez, a first-year student at Transylvania College in Lexington, Kentucky, told students he made an Excel spreadsheet to plan out every hour of his schedule during the semester so that he wouldn’t get behind in his studies.
NAC Class of 2013 alum Erin Davis, a first-year student at Birmingham-Southern College in Birmingham, Alabama, also found a way to address her academic challenges. Erin told students that she developed a reward program for studying. After studying for 40 minutes, for example, she would take a 10-minute walk and get a chocolate bar to snack on. One semester into her studies, Erin claims the “reward” program has worked.
To meet her academic challenges, NAC Class of 2013 alum, Brenda Benites, a first-year student at UC Riverside, told students she took advantage of TA’s & Professors’ office hours to ask questions & get to know school staff, especially for larger classes. Brenda also made sure to frequent the library, at times spending several hours per day while writing essays.
While studying away from home, most students experience some form of homesickness: depression, anxiety, withdrawn behavior, or trouble focusing. Sometimes, the symptoms surface almost immediately. In other cases, the symptoms don’t take effect until much later. NAC Class of 2013 alum, Hector Valencia, a first-year student at Hope College in Holland, Michigan, told students he didn’t really experience home sickness until the holidays hit, especially when a large number of his classmates travelled home to be with their families.
Another issue students face while attending college is covering their financial obligations, which one can understand with a quick glance at the average costs of tuition and board on U.S. News & World Report’s list of Best Colleges. NAC Class of 2010 alum, Favie Silva, who now attends CSU Fullerton, told students that she has saved money in school by preparing her own lunches as opposed to buying lunch everyday from the cafeteria or other fast food franchises.
NAC Class of 2013 alum, Sara Benitez, a first-year student at CSU East Bay, also talked with students about being careful while managing their money, especially when studying away from home. While attending CSU East Bay, Sara learned to navigate the Bay Area Rapid Transit (BART) system, but she found that traveling costs often left her with very little money to meet her other financial needs.
In addition to the panel, students heard from other alumni who were also present and willing to share their college insight.
NAC Class of 2010 alum, Genesis Luviano, a senior at Smith College in Northampton, Massachusetts, told students to take class assignments seriously, noting that “skipping” an assignment should not be an option. “You just have to know that you have to get it done. It’s not a matter of whether you’ll get a B or a B-minus. Basically, just knowing that it has to get done, that you don’t have a choice, is always a good thing.”
NAC Class of 2013 alum, Jackie Martinez, a first-year student at Allegheny College in Meadville, Pennsylvania, told students that being “tolerant” while studying away from home helps when dealing with culture shock. “Some people, they’re curious, and they haven’t encountered people like you, people who are different.” She continued, “So, always be tolerant.”
After the panel, students mingled with each other and enjoyed a potluck dinner of pizza, pasta, tostadas, tacos, and more. The potluck also served as an alumni reunion, allowing alumni to catch up with one another while enjoying a home-cooked, holiday meal.
Click HERE to watch a short video of the event on our Youtube channel.
Click HERE to see a full picture gallery of the event on our Facebook page.
Dec 24adminNo Comments