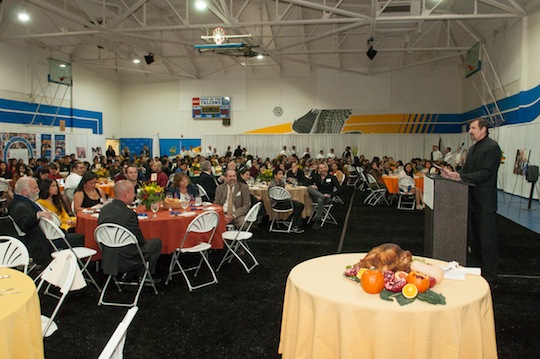 (Excerpt from the official press release): SANTA ANA, CA. – NOV. 22– The Nicholas Academic Centers (NAC) held their fifth annual Thanksgiving dinner event last Friday with more than 450 inner-city high school students and their families, celebrating the impressive academic success achieved by NAC participants.
“We have top-ranked, major universities beating down our doors to court our students,” said Broadcom (NASDAQ:BRCM) Co-Founder and former CEO Henry T. Nicholas, III, Ph.D., who founded the NAC in 2008 with retired Superior Court Judge Jack Mandel.  “For those of you who are first generation college students, I admire the bravery it takes to be that path-breaker.”
Nicholas, who will match a portion of the funds, added, “You guys are on track to earn $2 million in scholarships, and I will be writing a check at the end of the year for an additional $1 million.”
Over the past few months, highly-respected academic institutions — including the University of Notre Dame, Columbia University and Stanford University — have sent representatives to meet with NAC participants.
Horacio Quezada, a 19-year-old senior at Valley High School in Santa Ana, hopes to attend Notre Dame after meeting representatives of the school on a trip funded by the historic university.  He holds a 4.2 weighted grade point average despite having been in the US only two years.
“I had to hit the ground running as a junior last year and could not have had this immediate success without the help I receive from everyone here,” said Quezada.
Since 2008, more than 350 students have graduated from the NAC program with 95 percent attending college at a retention rate of 90 percent.  90 percent of the college attendees from NAC are serving as first-generation college students.  Currently NAC alumni are attending top colleges around the country, including Georgetown, the University of California, Los Angeles and the University of California, Berkeley.
Retired Superior Court Judge Mandel says centers now have set their sights on Ivy League schools.
“We have had representatives from Columbia University contact us about meeting students,” Mandel explained.  “It is pretty incredible the schools that are taking notice of our students after only five years of existence.”
“We are making a difference for those of you who take advantage of this opportunity,” added Mandel.  “Tonight, we have something to be thankful for here in Santa Ana.”
After everyone was served an early Thanksgiving feast, Jessica Aquino, an NAC alumna and current senior at Colgate University, spoke to the crowd.
“The NAC changed my life in ways I never could have imagined,” explained Aquino.  “I think I speak for all of us here when I say that the NAC has been a second home, and it is that rock that keeps us grounded.”
Click HERE to watch a Video of the event on our Youtube Channel.
Click HERE to visit our photo album on Facebook.
Dec 02adminNo Comments