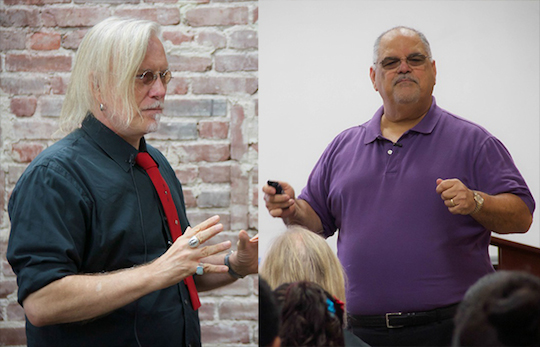 NAC students attending the Chapman Visiting Scholars Series lecture on Saturday, November 16, were treated to two presentations from esteemed Chapman faculty. Dr. Don Cardinal, Dean of Chapman University’s College of Educational Studies, shared his journey from a troubled adolescent to a college dean. He also explored the idea of discovering the “Rulebook of Success.” Dr. Peter McLaren, Distinguished Fellow in Critical Studies at Chapman University’s College of Educational Studies, talked with NAC students about his experience in the fields of education and critical studies; he then examined the life of author, educator, and philosopher Paulo Freire, noting his influence on the academic world, before finishing with Theatre of the Oppressed activities.
To open the lecture, Dr. Cardinal took an emotional “risk” and shared his personal background with NAC students, surprising many of them with the unlikely path he followed into a career in academia. Dr. Cardinal, a first-generation college graduate, nearly missed out on higher education when he was dismissed from community college with a low GPA. The dismissal coincided with a number of run-ins with the law, as well as the death of his father, and Dr. Cardinal’s family grew discouraged and began to withdraw their support.
One day, while working as a laborer on a punch press in a factory, Dr. Cardinal’s boss was fired without warning. This sparked an epiphany, and Dr. Cardinal decided, “I’m not going to have zero skills in my life, so that when adversity comes I can’t rebound.” He decided that going back to college and earning an education, which would prove no small feat, would provide him a better chance at stability.
To explain how and why his experience is relevant to students, Dr. Cardinal noted, “I need you to understand that no matter what you’ve gone through, no matter what your family circumstances are, no matter what you’ll still go through that are tough times, that you can transcend those; you can be successful no matter what happens in your life.”
While pushing through obstacles and moving closer to achieving his goals, Dr. Cardinal contemplated the existence of a “Rulebook of Success” and considered how such a guide could be created and used. Dr. Cardinal shared a few of the tips that he learned over the years while searching for, or rather creating, his own rulebook of success; tips he believes will help NAC students reach their goals. Among the elements listed, Dr. Cardinal included embracing hard work, working smart, finding mentors, knowing one’s self, and networking with others.
Dr. Peter McLaren opened the second half of the lecture by sharing his own story, charting his family’s rise from working to middle class in Toronto, Canada. While discussing his family, Dr. McLaren noted how different he was from his uncle, the war hero, who was more representative of the mainstream. “He didn’t like me because I was a hippy in the 1960s. I’d grown my hair long, I wore beads and bell bottoms, and I was part of the counter culture.” According to Dr. McLaren, he identified more with non-conformists because he shared their discontent, and he was unhappy with the injustice he saw in the world.
In 1980, Dr. McLaren wrote a book called Cries in the Corridors, about his own teaching experience in Canada in an effort to draw attention to the dire condition of the education system for inner-city students. During the process of getting his book published, the publisher insisted that he remove the analytical reflections of his experience and focus instead on the dramatic incidents that unfolded during his time teaching the Corridor kids. Shortly after its publication, the best-selling book rendered some unexpected and unfortunate results. “The community was demonized, and it had the exact opposite effect I hoped it would, writing that book.” The situation worsened when Dr. McLaren heard a white supremacist endorse his book on public radio, noting, “When you read how those dark-skinned kids act in class, you’ll want to change the immigration laws to keep them out.” Horrified, Dr. McLaren soon found a publisher in the United States willing to allow him to write a counter-book within the same book to talk about how the book should have been written. The “corrected” version is called Life in Schools.
Dr. McLaren’s new book caught the attention of Paulo Freire, and in 1987, Freire invited him to present at a conference in Havana, Cuba, for the Pan-American Psychology Association. Dr. McLaren, a noted Freire supporter and scholar, considered the late Paulo Freire his mentor, and while detailing events in Freire’s life, talked about how Freire’s experiences, books, and videos mentor him still.
For the latter part of his presentation, Dr. McLaren, with the help of Janae Dimick, the Director of Higher Education Services for the Nicholas Academic Centers, led NAC students in a number of Theatre of the Oppressed exercises.
In the first exercise, known as Columbian Hypnosis, students worked in pairs. During the exercise, one partner followed the hand movements of the other, keeping a close stare fixed on the moving hand. When the exercise was expanded to a group setting, a clear hierarchy emerged and students first noticed an issue of power.
Students also participated in an exercise called Blind Car, in which one partner led the other through a series of commands. The person in control, or the driver, signaled the blinded partner, or car, for changes in direction based on specifically placed touches on the back. A similar exercise followed in which students used unique sounds to lead their partners around the room. All of the exercises involved taking and relinquishing control.
Finally, in an appropriate conclusion to Dr. McLaren’s presentation, students studied structures of power by taking turns positioning and repositioning six chairs. Each layout demonstrated various unique models for the structure of power, ranging from one ruling the masses, to equal rule, to shifts in power over time.
Click HERE to watch a video of the presentations.
Nov 25adminNo Comments