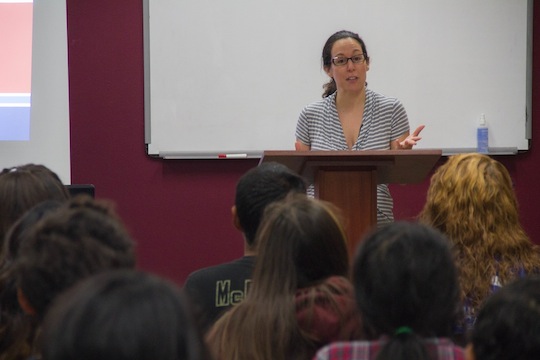 On Saturday, October 26, Marisa Cianciarulo, Professor at Chapman University’s Fowler School of Law and Director of Chapman’s Bette and Wylie Aitken Family Violence Clinic, talked with Nicholas Academic Centers’ students at the Chapman Visiting Scholars Series about the current state of immigration law and policy in the U.S.
“The reason why we have such a high population of undocumented immigrants, people who don’t have lawful status in the United States, is because there is no law for them to apply under.”
During the lecture, Professor Cianciarulo debunked immigration myths about why immigrants do not have lawful status and informed students about the limited options immigrants’ have to become residents, which include applying for U visas for victims of violent crimes, T visas for victims of human trafficking, and asylum for those fleeing persecution.
According to Professor Cianciarulo, “The ways in which someone can become legal are pretty limited,” and even marriage and family connections are susceptible to long wait periods and can take up to twenty or more years. With marriage, for example, the law is different for sponsored immigrants who entered the United States without documentation. Professor Cianciarulo notes, “They are not eligible to apply for their green card in the United States.” Instead, the approved applications for undocumented spouses green cards are forwarded to the consulate in their country of origin. Then, upon returning to their countries of origin, spouses are barred from returning to the U.S. for a period of ten years. Waivers can be filed to expedite the process and cancel the bar if the separation causes extreme hardship for the parties involved. If the waiver is denied, however, there is no appeal.
Familial connections do not offer much hope either. The Pew Hispanic Center reports that 4.5 million US Citizen children in the United States have at least one undocumented parent. Unfortunately, U.S. citizen children must be 21 years of age before they can sponsor their parents, who must then return to their countries of origin and wait the requisite 10 years before becoming eligible to enter the U.S. legally.
Professor Cianciarulo shared experiences from her career as a lawyer to better explain how immigrants fleeing persecution can qualify for asylum in the U.S. When the Taliban outlawed education for females in the capital city of Afghanistan near the turn of the century, a number of women risked their lives and secretly educated young girls at home. Later, after these women fled to the U.S,, Professor Cianciarulo represented them in court and helped them get asylum, based on differences in religion, politics, and memberships in a particular social group, in this case, being women.
Professor Cianciarulo also explained the particulars of U visas, as well as T visas, covered under the Trafficking Victims Protection Act. U visas and T visas are mutually beneficial for the victims and law enforcement. Before the visas were available, undocumented victims were often too afraid to come forward because of their illegal status. Now, with their cooperation, the perpetrators of crimes and human trafficking cannot threaten victims with reporting their illegal status. Law enforcement reduces crime, and victims become eligible to apply for lawful permanent resident status. The accused does not have to be convicted of a crime for the visas to remain active.
Most students were surprised to learn that “DACA, which is kind of like the DREAM Act, is not a law.” Instead, it is “an order from the President, telling two agencies how they’re going to deal with a certain group of people. It can end with another letter, saying ‘this program is going to end.’ It can end with a change in administration,” whereas a law cannot end unless someone actually changes the law.
In the second half of the lecture, Professor Cianciarulo divided students into groups, each with a unique case study concerning various immigration challenges. Students applied what they learned about immigration laws & policies to defend their clients and help them gain permanent resident status.
One of the case studies involved a 20-year-old woman named Patti, an undocumented immigrant who has lived in the U.S. since she was 8-years-old, and is now married to an abusive husband, Steve, a U.S. citizen. After suffering a concussion during a confrontation with Steve, a hospital nurse encouraged Patti to file a police report. NAC students, serving as Patti’s legal counsel, weighed Patti’s options. With the U visa, Patti would have to wait three years to apply for a green card, and DACA would not grant her legal status either. Considering these factors, students decided that Patti would best be served applying for protection under the Violence Against Women Act (VAWA) because she’s married to a U.S. citizen who has been abusive.
In addition to discussing U.S. Immigration Policy, Professor Cianciarulo touched briefly on immigration policy in Canada, wherein a point system is used to qualify applicants based on criteria like education, family already legally residing in the country, and other factors. She also looked at Europe and Australia.
“Every country in the world struggles with immigration and struggles with multiculturalism.” Referring to current US immigration policy, Professor Cianciarulo adds, “Our problem, I think, is our laws just haven’t kept up with other factors, mainly economic factors and changing demographics around the world.”
To close, Professor Cianciarulo encouraged students to get involved with local community organizations like the DREAM Team of Orange County, among others, to advocate for positive immigration reform.
Click HERE to watch a video of the presentation.
Nov 25adminNo Comments