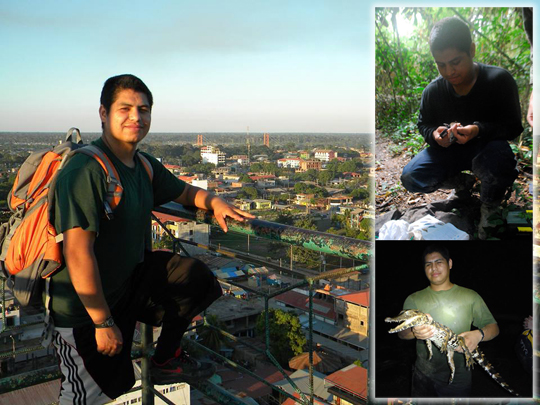 Into the Wild: NAC Class of 2010 Alum Jerry Zelaya Spends the Summer in the Jungles of Peru

In 2010, Jerry Zelaya left Santa Ana and traveled 2,500 miles in pursuit of higher education at Hampshire College in Amherst, Massachusetts. Shortly after he arrived, the seasons shifted, and Jerry, an Environmental Studies major, outfitted in t-shirts and shorts, found himself underdressed and unprepared for his new environment. Fall gave way to winter, and Jerry began to miss the sun as much as he missed his family and friends back home. Over time, however, Jerry adapted to his surroundings culturally, academically, and even climatically. This summer, before starting his junior year, Jerry decided to challenge himself to adapt to an entirely new experience, and he applied for an internship through Fauna Forever to spend two months researching wildlife in the Peruvian jungle.
What started as a Google search for “animal behavior and conservation” soon led Jerry to Puerto Maldonado, Peru. With Fauna Forever, a non-profit organization committed to researching and protecting Peru’s rainforests, Jerry knew he had found the hands-on experience he was looking for. “To get to know the organization, I looked at blogs of past interns and the work they did while interning. After reading about the positive experiences, I knew this internship was for me. It is very hands-on. Some wildlife internships do not allow a hands-on experience as they do not want to disturb the wildlife, but I received guidance for conducting my own research with minimal impact.”
From Puerto Maldonado, Jerry’s team traveled by car for one hour before embarking on a two-hour boat ride up the Rio Las Piedras. According to Jerry, the main purpose of his research was “to better understand the current challenges facing the rainforest and to see how the disturbance of habitat affects the species in the rainforest.” Jerry and his team monitored behavioral changes in species in relation to habitat disturbance caused by local industries: Brazilian nut farming, timber logging, and gold mining. To do this, they counted the species’ population, tagged birds, followed monkeys, and recorded their observations.
Jerry learned a lot while studying birds during the day and searching for amphibians throughout the night. He also accomplished his goal of learning more than he expected. “What I never expected to learn was using my sense of smell to identify any species that were once present in the area. In the jungle, you have to use your sense of smell and hearing to know what is around you. When I was on the bird team, I was taught to identify birds by their birdcall or stress call.” One of the highlights from the trip came when Jerry untangled a bird from “mist netting” without assistance. “It usually requires a lot of patience because the wings can be very delicate and the bird will flap and flop around. If the bird is tangled up for too long, it can become stressed and die on the scene. In a way, you are being timed.”
Though Jerry struggled at first to adjust to the jungle and the tasks he performed, he adapted. As the days passed, he improved in his duties and even learned to tolerate the mosquitoes, although conquering the metric system proved a worthy challenge. “One of my biggest challenges was learning the metric system, translating kilometers to miles or meters to feet.”
From here, Jerry plans to adjust his major from Animal Behavior and Environmental Studies to Environmental Policy and Photography. “As an avid photographer, I am aiming to do a project for National Geographic, to let the world see how scarce the rainforest is, and let them witness through my lens the negative impact humans have on wildlife.” After college, Jerry plans to spend more time conducting research before entering graduate school to pursue a doctorate.
Sep 17adminNo Comments