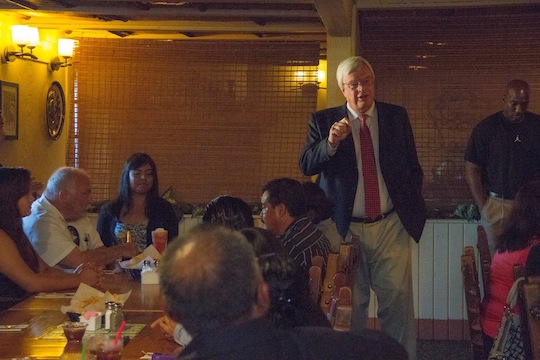 Getting through school is no easy task. Although the national high school graduation rate recently hit a 40-year high at nearly 75%, “an estimated 1 million students will fail to graduate high school this year, a loss of 5,500 students for every day on the academic calendar,” according to Emily Richmond’s article on a report from Education Week. Once in college, “as many as one in three first year students” does not return for sophomore year, according to a U.S. News report on freshman retention rates. Reasons for dropping out include personal, familial, academic, and financial struggles. These statistics build a strong case for the importance of maintaining consistent mentoring and support throughout a student’s academic career. Providing a strong support system is one of many areas in which a long-time Nicholas Academic Centers’ partner, Morningside College in Sioux City, Iowa, excels.
On Monday, July 22, the President of Morningside College, John C. Reynders, and his wife, Robin, flew out to Santa Ana and visited with NAC students and their parents for the third time in four years. President Reynders cites NAC Co-founder Judge Jack K. Mandel as a mentor and a source of inspiration for recruiting students from Santa Ana. “I see Judge Mandel as a mentor of mine. My respect for his passion for helping the students of Santa Ana attend and succeed in college has motivated me to replicate the program he started at Allegheny College at [Morningside College]. I believe in the program and the difference it makes in young people’s lives and am very pleased that we can participate.”
Also in attendance, Andre McWell, Morningside College’s Student Services Coordinator, knows that transitioning to college can be difficult for students, as well as their parents, especially when the college is nearly 1,650 miles from home. “I have only had contact with a couple of the students’ parents while the students have been on our campus. That’s why it’s so important for us to get out and visit with them in the summer. I look at the visit as a transfer of custody, and I want to go out and speak face to face with the parents and guardians of the students who will be on our campus and assure them that their kids will be taken care of, and answer any questions they may have in person. They are sending their kids not only out of state, but thousands of miles away.”
NAC Class of 2013 alum Desiree Ponce is one of seven recent NAC graduates who will begin their higher education journey at Morningside College in the fall. Desiree’s parents attended the dinner, and they expressed their appreciation for President Reynders’ visit. Desiree’s dad, who previously felt uncomfortable about sending his daughter to an out-of-state school, remarks, “Seeing President Reynders and the interest he and his wife have in seeing the new students and their families gave me peace because now I know and can see that they care about each individual. I feel happy that my daughter is going to a school that cares and takes the time to help others. I just want to say that the dinner was a great idea because I was able to see the current students enrolled [at Morningside] and see how happy they are to be there, and their parents are open to it; it shows me that my daughter is in good hands and on the right track.”
NAC Co-founder Judge Jack K. Mandel agrees that attending Morningside College qualifies as taking “the right track.” “Morningside College is an elite liberal arts college, which prepares young people for life, an effective life, in supporting the community and opening doors for graduate schools. Our young people have not had this experience, but they thrive on it when the opportunity is presented.” The Judge adds, “[President] John Reynders has created an open and warm campus where our students have had the opportunity to immerse themselves in Middle America, and do it successfully. There’s always apprehension as they leave the warmth and comfort of their homes in Santa Ana. I’ve yet to find any that have not had a superior response from President Reynders and his administrators at Morningside College in Sioux City.”
Also on hand at the dinner were several NAC alumni who already attend Morningside College. NAC Class of 2011 alum, Cynthia Antunez, took the opportunity to talk with incoming freshmen. “I spoke to several of the incoming freshmen about my own previous experiences, such as leaving home for the first time, getting used to the weather, and eating food. I mentioned that the food is very different and the weather is too, but I let them know they will get used to it just like all the other Morningside students have. Also, being homesick will eventually hit them, but it will be okay and that all it takes is a call home to say, ‘Hey mom and dad/sister or brother, I miss you; I am homesick, but I will be fine.’” NAC Class of 2009 alum and recent Morningside College graduate Mayra Orozco talked to parents of recent NAC grads, noting of President Reynders, “His accessibility is a great benefit, and he has become a friend for life.”
Morningside College is a top-ranked Regional Midwest college on U.S. News & World Report’s college-ranking list. The school features a 13:1 student/faculty ratio, and 99% of students find work or attend graduate school within 6 months of graduating. On average, Morningside covers 90% of tuition for NAC students.
Aug 06adminNo Comments

← NAC Students Get Hands-On Experience at Bucknell University Engineering Camp
→ Into the Wild: NAC Class of 2010 Alum Jerry Zelaya Spends the Summer in the Jungles of Peru