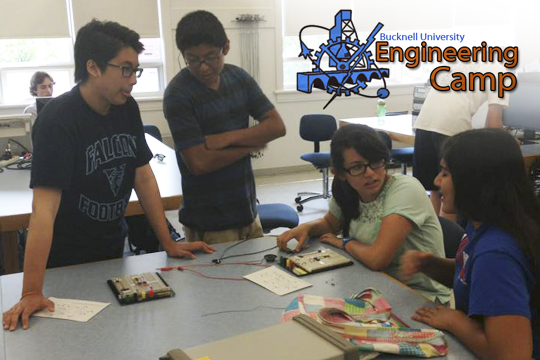 While many might argue that a glass is either half empty or half full, the four Nicholas Academic Centers’ students who recently attended the Bucknell University Engineering Camp in Lewisburg, Pennsylvania, would likely argue the glass is simply twice the size it needs to be. For the second year in a row, NAC students have traveled to Bucknell University to participate in a weeklong, hands-on introduction to engineering.
From Monday, June 24, to Friday, June 28, NAC rising seniors Brayham Hernandez, Alejandra Dominguez, Estefania Huitron, and Kevin Vongsotsavanh spent nearly seven hours per day in classrooms and labs studying different fields of engineering, including Chemical, Bio-Chemical, Mechanical, Electrical, Solar-Power, Cosmetic, and even Nanotechnology.
Each class consisted of approximately one hour of lecture and another hour of hands-on lab work. Students were warned early on that the academic schedule would be rigorous, but also fun. Brayham Hernandez appreciated the challenge. “I enjoyed Mechanical Engineering because I like to make things. In the class, we were given a lecture on robotics. Then, for our hands-on project we were asked to make a robotic arm that could pick things up, and we could only use simple materials to build the arm: cardboard, paper clips, glue, tape, push pins, and a couple of other things. The challenge showed us how much we can do using only simple materials.” Brayham’s robotic arm was able to pick up half of the items it needed to pick up. Brayham notes, “All of the groups struggled, but it was a lot of fun.”
Estefania Huitron, one of only a handful of girls who participated in the program, found the “Atmospheric Particles” class, which is related to Chemical Engineering, to be the most interesting course in the curriculum. “I found it very interesting to learn about the atmosphere and what it is composed of. I especially enjoyed an activity in which we combined chemicals in order to form a gas cloud in a bottle.”
Alejandra Dominguez enjoyed Cosmetic Engineering, which touched on her fascination with make-up, and she was surprised to learn how versatile an engineering degree can be. “Our instructor emphasized that even if we have an engineering degree, we are not limited to just being an engineer. Engineers, basically, are problem solvers. These are the skills that can give us a boost in the cosmetics industry, or in any industry.”
One area in need of solutions for a sustainable future is the Energy Industry. While attending classes at Bucknell, Kevin Vongsotsavanh took a special interest in a class on Electrical Energy. “Electrical Energy caught my eye because balancing the supply and demand of energy is one of the most pressing issues in our generation, and the professor had a lot of experience in the field. In his lecture, the professor explored alternative options for energy and the class participated in a discussion about which alternative would be best. After that, we tried out some prototypes and went to see the Bucknell University solar panels and wind turbine.”
The Engineering Camp serves a dual purpose. The program allows high school students to experience a collegiate environment while it also encourages them to further explore various fields of engineering. Alejandra Dominguez credits the program for introducing her to her major. “After Bucknell, I discovered that I want to major in chemical engineering. I want to use this major to get into the cosmetic industry and become a cosmetic engineer. I can use the knowledge I gain from working with makeup in the lab and go into the business side of the industry.”
According to Brayham, “The Bucknell camp actually encouraged me even more to go into engineering. I wanted to go into the field before, but now I know I want to go into Mechanical Engineering for sure. The program opened new doors, definitely.” Estefania adds, “This program truly opened my eyes to engineering, what it really is, as well as how and where it is applied.”
Last year’s Bucknell Engineering Camp participant, NAC student Nancy Charco, stated that while the camp did not cover Environmental Engineering, her chosen field, it did increase her overall interest in engineering.
The Bucknell Engineering Camp is one of many summer programs NAC students will participate in this year. Other programs include Girls Inc., C.O.S.M.O.S Summer Program for Mathematics and Science at UC Irvine and UC San Diego, a summer program in England, the High School Latino Leaders in D.C. Program for the Congressional Hispanic Caucus Institute, the ACE Mentor Program, and Project Self.
Jul 17adminNo Comments