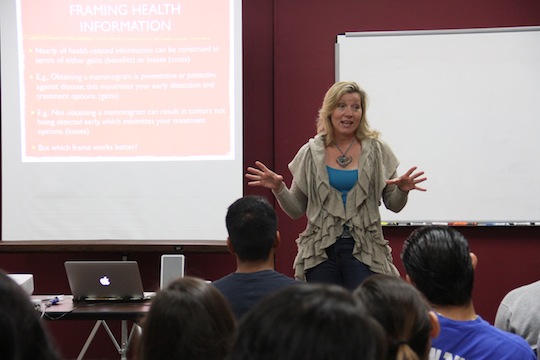 On Saturday, April 27, professional filmmaker and Chapman Professor Sally Rubin introduced Nicholas Academic Centers’ students to Documentary Film at the latest installment of the Chapman Visiting Scholars Series. During the lecture, Professor Rubin shared clips from two of her films, including Life on the Line, about a family separated by the US/Mexico border, and The Last Mountain, about her father’s death in a hiking accident when she was a teenager. Students also watched a Kickstarter clip for Professor Rubin’s forthcoming film about turbans, “a little piece of cloth with a whole lot of meaning attached to it.” Each clip represented a different genre of documentary film: personal, cinema vérité, and survey/essay.
To open the lecture, Professor Rubin shared that she started making films at a young age. “I was about ten years old, actually, when I started making films. My dad brought home a (hi-8) video camera; I picked it up immediately, and just felt such a sense of power and ability to tell stories.” She continues, “It was something I felt I could do on my own or with friends, and show it to people and really impact them.”
After screening The Last Mountain, an example of a “personal documentary,” Professor Rubin asked students to write out which type of documentary they would make if given the chance; Professor Rubin also asked students to describe scenes they would shoot, from interviewing relevant sources to establishing shots of locations. After planning out their documentaries and discussing the results with a partner, several students shared their ideas with all in attendance. NAC student Hector Valencia said he would like to make a film about how different people cope with familial struggles, and how these struggles can be used to unite people rather than divide them.
Moving forward with the lecture, Professor Rubin helped explain the concept of “cinema vérité,” or true cinema, by showing an excerpt from her upcoming film, Life on the Line. In such films, the director/filmmaker does not narrate or even interact in the scenes, but instead acts more like a “fly on the wall” and captures life as it unfolds between subjects on the screen.
The lecture definitely impacted the students. NAC student Melanie Ballesteros is now considering making a documentary film that looks at the lives of girls living in Guatemala to encourage young women around the world to take a closer look at their lives and appreciate what they have while also considering ways to improve their situation(s). NAC student Luis Campos identified with the relationship between the young girl and her mother in Life on the Line because the mother’s expectations for the young girl to do well in school would not be met with anything less than perfection. With a smile, Luis comments, “Her mom told her she doesn’t want a 93%, or a 94%, just a 100%, and nothing else.” Luis mentioned that he would like to make a documentary film about gangs in Santa Ana.
Click HERE to watch Professor Rubin’s film, The Last Mountain.
Apr 30adminNo Comments

← From 4 to 2 to 4 Again: NAC Class of 2010 Alum Daniel Arambula Transfers Despite the Odds
→ Dr. Lisa Sparks Brings Health Literacy & Inspiration to the NAC at Chapman Visiting Scholars Series