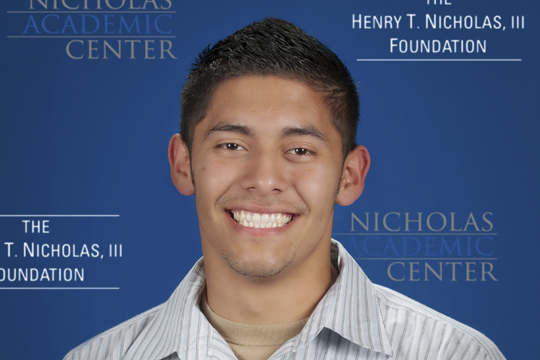 From 4 to 2 to 4 Again: NAC Class of 2010 Alum Daniel Arambula Transfers Despite the Odds

In 2010, after a discouraging final semester in high school, NAC alum Daniel Arambula found himself having to adjust from preparing to go to UC San Diego (UCSD) to instead struggling to register for classes at Orange Coast College (OCC). On the challenge of attending a community college, Daniel notes, “Doing the 2-year program at any community college is a real challenge because student enrollment is always increasing and the courses being offered are always decreasing, so getting even basic courses becomes almost impossible.” However, after spending two years at OCC, Daniel beat the odds and transferred to California State University, Fullerton (CSUF) in Fall 2012.
While it is true that California Community Colleges boast the highest enrollment rates, offering higher education to more than 2 million students per year, a significantly small number of these students, especially under-represented students like Daniel, will transfer to a four-year institution and/or graduate from college within 10 years. In a recent article for the Huffington Post, Elsa Nuñez, President of Eastern Connecticut State College, cited data compiled by the Education Trust on under-served student completion rates. “Only 12 percent of minority community college students transfer to a four-year institution within four years of enrolling in a community college, and only 7 percent complete a bachelor’s degree within 10 years.” The road to completion often proves difficult, and even more so when socioeconomic status, ethnicity, and other factors are considered.
As the sixth oldest in a family of 14, Daniel found inspiration in his older siblings, many of whom attended 4-year schools directly after graduating high school, as well as his younger siblings, who look to him for guidance. “Being one of the first ones to go to a 2-year school after being accepted to and dropped from a 4-year school, the pressure to transfer as soon as possible was extremely high. Education is big in my family, so I had to set the example for my younger brothers and sisters.” Daniel continues, “I had to show them that even when life knocks you down, you have to get back up and continue pushing forward.”
Nowadays, when he is not playing on the Men’s Rugby Team at CSUF or working at Starbucks, Daniel is busy studying to become a Mechanical Engineer and looking for internship opportunities. Encouraged by Dr. Mickey Laux at OCC, Daniel is also minoring in Chemistry. “Dr. Mickey Laux showed me that Chemistry could really open up many doors in the engineering fields.” Daniel attributes his focus on academics to his experience at OCC. “I know several students who, when they went straight to a 4-year school, got distracted with fraternities, sororities, and the fun aspects of college, which is part of the college experience, but they lost that balance between academics and partying.” Daniel adds, “Going to OCC really changed how much I value each and every class I get because in high school and 4-year universities, courses are always open and students tend to take them for granted. At OCC, failing or dropping a class means one’s time there can easily be extended by an entire year because, due to budget cuts, not every course is offered every semester, and sometimes you have to just wait until that course is offered again and hope you can register for it.”
Currently, Daniel is on course to graduate in Spring 2015. After graduation, Daniel plans to join the workforce for a year before applying to graduate school to work towards a Master’s Degree in Engineering. “Because times and the economy change every year, no one really knows what the future holds; so, if I can get a job and start my career before returning to school, that will help build my resume and experience, which is important.” Regardless of the path he chooses, Daniel will take what he has learned since his days in high school and continue to push forward, setting the example for those who follow. Daniel encourages future NAC grads to do the same. “Take every semester seriously, even your last semester of senior year; one class can detour your plans in the opposite direction, and getting back on track is harder than just staying on track.”
Apr 09adminNo Comments