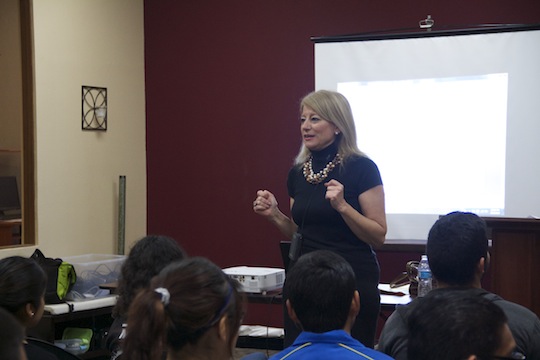 This time around for the Chapman Visiting Scholars Series, students of the Nicholas Academic Centers travelled to Italy, but not by air or sea as one might expect. Instead, Dr. Angela Tumini, a Professor of Italian Studies at Chapman University, took NAC students on a virtual tour of the boot-shaped country and showed pictures and videos, listened to music, and discussed multiple aspects of Italian culture, including its place in history, politics, religion, sports, and cuisine, as well as in the fashion, film, and automotive industries.
In a presentation entitled, “Italy Should Be Compulsory: What Makes Italy & Italian Culture So Popular Across The World?” Dr. Tumini set out to inspire students to travel abroad and experience other cultures. “Think that the world is yours, and to have an experience in a country like [Italy], it makes you come back and have a different outlook on the world.” Dr. Tumini continues, “What I want [students] to come back with is a more global mentality, and not one restricted to Orange County or wherever they come from.”
To open the lecture, Dr. Tumini invited students to join her on a “journey” through Italy and Italian culture, from ancient times to modern day. Through watching film clips and participating in discussion, students learned how Roman mythology gave Rome its name, how gladiators really lived, and how Italian tourism depends so heavily on Italy’s past. According to Dr. Tumini, “A lot of the economy today is based on [Italian] heritage, the historic, artistic, traditional heritage of the past because it brings tourists.” Perhaps the most visible remnant of Italy’s past rests in its giant landmark, the Coliseum, an engineering feat that remains “mostly” standing after 2,000 years, despite destructive earthquakes; however, the Coliseum is only one of many landmarks in a country rich with museums, churches, and other cultural assets, several of which NAC students explored during their virtual tour.
After examining a bit of Italy’s history and studying the effects of its renaissance, Dr. Tumini shared more recent and entertaining Italian contributions to the world. NAC students learned about the invention of pizza in Naples, as well as the triumph of the world’s largest round and gluten-free pizza, created in Rome in 2012, weighing in at 51,257 pounds, called “Ottavia” after Rome’s first emperor, Octavian Agustus. Dr. Tumini also introduced students to famed Italian film director, Federico Fellini, and his 1960 film, “La Dolce Vita.” Finally, students discovered that in Italy, soccer is to many as important as religion, or so Dr. Tumini joked. According to a handout given during the lecture, “72% of Italian men and 37% of women” are soccer fans, also known as tifosi. Dr. Tumini shared a story in which she and a group of Chapman students were in Italy when the Italian team beat Germany in a bid for the European Cup. “The whole country went so crazy that nobody went to bed, they wore Italian-flag wigs, and everything like that, and my students were kind of taken by this; they had never seen a celebration like that before.”
After sharing that she enjoyed the discussion of pizza, fashion, and soccer, NAC student Blanca Martinez commented, “[Italian] culture is awesome. I would like to go there and visit!” NAC student Brayham Hernandez also found the lecture fascinating. “I liked everything, but if I were to pick one thing, it would probably be the history that Italy has given us.” Brayham also noted that he enjoyed the discussion of Italian mythology, and the story of Romulus and Remus and the founding of Rome.
Exposing students to Professors like Dr. Tumini and encouraging them to attend and participate in events that promote cultural enrichment, including downtown Santa Ana’s “Noche de Altares” festival, is one way the Nicholas Academic Centers attempts to nurture well-rounded students. While it is true that trips abroad can be expensive, Dr. Tumini reminded those in attendance that most students participating in study-abroad programs have access to numerous scholarship opportunities. As a testament to the possibility of studying abroad, a number of NAC alums have done so while working towards their degrees in college. To date, NAC alums have spent time abroad as travelers, students, and/or interns in countries around the world, including France, Ecuador, Spain, Morocco, Italy, and India, to name just a few.
The next Chapman lecture is scheduled for Saturday, April 27th. NAC student Brayham Hernandez joins the NAC in encouraging you to attend. “I really like going to these lectures at the NAC. You learn something new every month.”
Click HERE to watch a video of the event on our Youtube channel.
Mar 22adminNo Comments

← NAC Students Get Free Haircuts from Salon Lujon Hairstylists
→ From 4 to 2 to 4 Again: NAC Class of 2010 Alum Daniel Arambula Transfers Despite the Odds