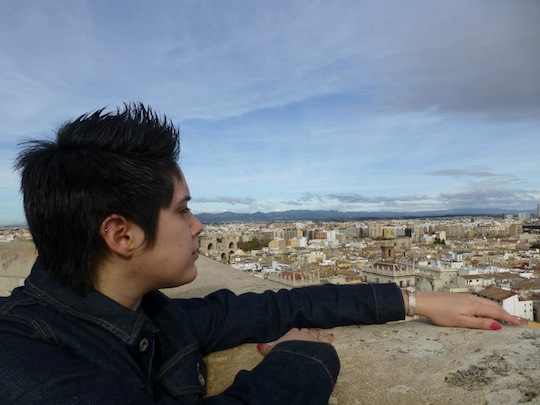 In 2010, NAC alum Genesis Luviano left Santa Ana, California in pursuit of higher education at Smith College in Northampton, Massachusetts, just over 2900 miles from home. After graduating fourth in her class from Valley High School as a Solorio Scholar with a 4.75 GPA, Genesis prepared to begin the next phase of her life and edge closer to her goal of becoming a Spanish teacher. Although she arrived at Smith without keys and needed her new roommate to open the door, Genesis soon took control of her situation and organized her class schedule, balancing academic studies with extracurricular activities like joining the swim team, participating in “house” events, and attending meetings with the Nosotras Club. While she found comfort in connecting with other Hispanic students at Smith, Genesis actively developed friendships with people of other cultures. “I wanted to take advantage of the diversity that Smith has to offer. I focused my attention on getting to know people from cultures I wasn’t familiar with.” This interest in exploring other cultures has now taken Genesis nearly 6,000 miles from home to Barcelona, Spain, where she is currently studying abroad for her junior year of college.
“I have always wanted to travel, and Smith makes it really easy to travel abroad, so I jumped at the opportunity to study in Barcelona, Spain for an entire year.” In addition to using her time to perfect her Spanish while talking with people in more than 14 different cities throughout Spain, Genesis has also taken advantage of her time abroad and traveled to places like Lisbon, Portugal and Marrakesh, Morocco. Genesis notes that it is during her travels that she finds she is learning things she could not have learned in books.
Recently, while in Morocco, Genesis was returning to her hostel after a day of exploring Marrakesh when two Moroccan children spotted her camera and asked via hand gestures to be photographed. After snapping a few pictures, Genesis’ fellow traveler and Class of 2010 NAC alum, Fernando Monjaras, offered the boys a chocolate bar. One of the boys responded by hugging Fernando. Genesis states, “This young boy, who must’ve been around seven to nine years old, showed me a very important lesson. Just because you don’t speak the same language as someone else, or even if you come from a completely different world, it does not mean that you cannot understand him or her. The language of love, gratitude, and friendship is really universal.”
Like the encounter with the Moroccan children, many of Genesis’ interactions with other people in Barcelona have reinforced her newfound belief that people are not as different as she had previously imagined. “I have met many different people during my travels and have learned a lot from them. Deep inside, we all have the same goals that drive us, the same need and the same desire to find happiness, and how we go about achieving these goals is what makes us different.” She adds, “The most important thing that I have learned is to enjoy life.” In February, Genesis plans to continue her out-of-the-classroom experience and travel with her program to Rome, Italy.
Further on down the road, after graduating from Smith, Genesis plans to return to California and complete a teacher certification program. “I believe that society is changing quickly into something that in a few years we will see as an atrocity. However, I think that some of the most important people in society in terms of changing this are teachers. The youth of our nation need role models that they can look up to and respect, someone from whom they can learn about more than a subject.”
Jan 22adminNo Comments