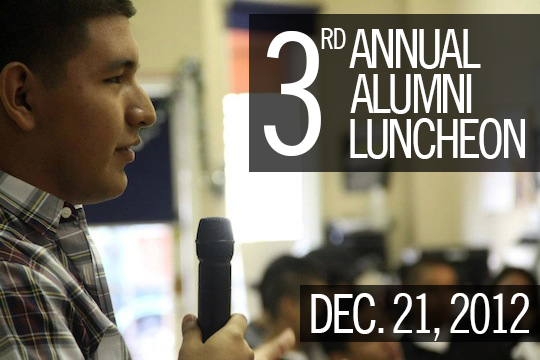 The Nicholas Academic Centers recently celebrated its 3rd Annual Alumni Luncheon, reuniting four years of NAC graduates for an afternoon of sharing college stories and eating. Alumni, who now attend over 40 top colleges across the United States, are often busy with internships and other programs during the summer, making the winter break the ideal time to come together.
NAC Executive Director Hugo Gutierrez told returning alumni, “It is always very rewarding and gratifying for the staff here at the NAC to see you come back and to share with us how you guys are doing, and it’s awesome just to see you being successful.” NAC Co-Founder and retired Orange County Superior Court Judge Jack K. Mandel called the alumni’s success revolutionary and noted how it will affect future NAC graduates. “All of this works because of you. The doors you open will let others through, the students who are following you.”
During the luncheon, several alumni took to the microphone and shared their college experiences thus far. Mariana Hernandez, a class of 2010 NAC alum currently in her junior year at Georgetown University in Washington D.C., said that college has proven not only challenging but also rewarding. “I’ve learned a lot about myself, and I’ve learned a lot about appreciating my community and appreciating California in general.” Pedro O’Campo, a class of 2010 NAC alum now in his junior year at Allegheny College in Meadville, PA, talked about his recent experience volunteering in Ecuador. “This previous summer I went to Ecuador, and I taught children about global warming, and I painted a church with the community as a whole.” Class of 2012 NAC alum, Alejandro Martinez, now attending Santa Ana College in Santa Ana, CA, spoke highly of his school’s student diversity, noting his pleasant surprise at meeting people from across the United States and around the world.
Alumni also shared their feelings about what it’s like to return to Santa Ana after studying away from home, sometimes without returning for an entire year. Class of 2010 NAC alum Erik Chavarria, now in his junior year Morningside College in Sioux City, Iowa, stated, “Coming back after being away for a year and seeing everyone change so much… you can see how they come back almost like a sponge, the things they’ve absorbed around them, around their environment; somehow, they’re still that same person, but you see them grow.” Mark Piñon, a class of 2012 NAC alum and freshman at University of California, Davis in Davis, CA, was excited to get back to eating familiar food. Mark noted that while he adjusted to eating new types of food better than some of his friends, he always looked forward to returning home for authentic family-style Mexican food. The NAC obliged by providing freshly made tacos.
Click HERE to watch a video of the event.
Jan 04adminNo Comments