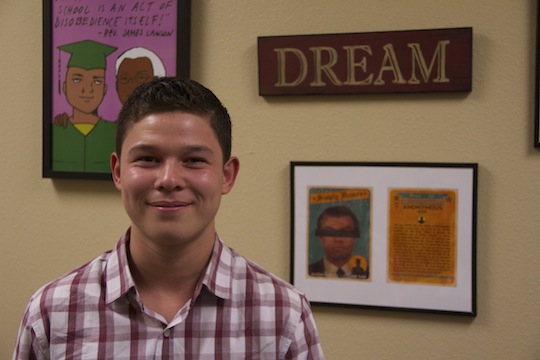 Class of 2012 NAC Alum Rudy Santana is only one semester into his college career at Union College in Schenectady, New York, but the list of accomplishments he has already compiled is more reflective of a seasoned student. In addition to maintaining a high GPA while working his way toward earning a Bachelor’s Degree in Electrical Engineering, Rudy is active in several clubs and has earned a position on the Union College Soccer team.
Of the many extracurricular activities Rudy participates in at Union, one that keeps him busy year-round is the Academic Opportunity Program (AOP). Rudy even flew out to New York five weeks early to get a head start as an AOP representative for his freshman class. In his role as a representative, Rudy meets in panels with representatives from each class and together they plan and organize events for the entire body of AOP students. Past events include bowling nights and trips to Six Flags, and soon the organization will host a talent show wherein winners will receive $500 worth of gift cards. “During the year, we always do our own thing, so coming together for these events is always great for reconnecting and catching up with friends.” In exchange for his AOP service, Rudy earns additional financial aid.
Outside of AOP, Rudy also helps out the CELA group (Circulo Estudiantil Latino Americano), which focuses on “issues pertaining to students of Latin American descent” and “strives to enhance and increase the diverse campus community while vigorously representing Latin American cultures.” The group recently celebrated Mexican Independence day, cooking enchiladas and playing music (via CDs) for those in attendance. “We were teaching people about our culture and showing them how to make Hispanic food. Before the event, we put flyers up on campus, and it was open to anybody who wanted to come.” According to Rudy, the food ran out quickly, but the music of Gerardo Ortiz and Vicente Fernandez played on for hours.
Another place Rudy can be found is on the soccer field. He has been playing soccer since he learned to walk, and he is now sharing with the Union College team the talent he cultivated over the years while playing for Godinez Fundamental High School, as well as PSG in Santa Ana and Santa Ana F.C. He pulled a hamstring in pre-season, but he still played two regular season games. The team made it all the way to division semi-finals. Rudy is looking forward to joining the team next summer for a special soccer program in Costa Rica. In the meantime, he will continue to play with the indoor league he joined back in New York.
One of Rudy’s greatest first-semester highlights came when his engineering team won a class-wide competition. Rudy helped construct a wooden robot programmed to pick up and deliver a given object. The design included a forklift-like device and operated via custom coding developed by the group. “We were lucky in that we always worked together, and if someone couldn’t make it, others would step in and get everything done.”
Through all of his experiences, Rudy is grateful for the mentorship he receives from Ervin Meneses, a fellow NAC Alum (from the Class of 2011) and Engineering student at Union College.
Dec 03adminNo Comments