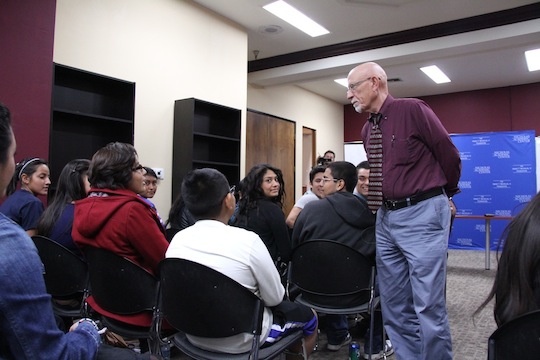 On Saturday, December 15, Dr. William L. Cumiford, Associate Professor for the Wilkinson College of Humanities and Social Sciences’ Department of History, closed out the Chapman Visiting Scholars Series for 2012 with his presentation, “A Study of History In A Digital Age.” During the presentation, Dr. Cumiford engaged Nicholas Academic Centers’ students in conversation, discussing the benefits and disadvantages of technology in its many forms. Students were also asked to consider the role of “heroes” in a contemporary context and look at how perceptions of time and progress shape people’s values.
To open the discussion, Dr. Cumiford asked students, “Imagine what your life would be like [without computers, cell phones, electronic tablets, televisions, and radios]. What would you do? How would you spend your time?” Replies ranged from reading and sleeping to getting involved in sports and gardening. One student answered, “I would try to create technology.” When asked how, the student was unsure. Dr. Cumiford suggested a good place to start would be with one of his native technological tools: his hands.
The discussion then segued into considering how people lived and communicated in the days before the invention of the electronic devices used today. NAC student Marilynda Bustamante, a senior at Valley High School, imagined people lived “stress free”. Marilynda’s response opened the discussion to the positive and negative attributes of modern technology. While most in attendance agreed the speed and convenience and of using computers and cell phones to communicate with others outweighed the negatives, several students expressed a sense of pressure in always being “accessible”. They noted that their privacy has become a rare commodity in the age of cell phones. NAC student Giovanni Hernandez, a senior at Godinez Fundamental High School, added, “When you progress in some things, you’re kind of giving other things up. Sometimes you forget about things that were important before.”
Moving the conversation forward, Dr. Cumiford asked students to consider the concept of heroes. Students started by defining the term. Blanca Martinez, a junior at Valley High School, claimed, “I think a real hero is a person [who] is always going to be there for you, is going to be able to help you out, and that you look up to.” While a few students were able to cite heroes in their lives, many could not. Dr. Cumiford asked why people need heroes before suggesting they serve as models for people to pattern themselves after. Recognizing the shortage of heroes in the students’ responses, Dr. Cumiford explored the role and status of celebrities, asking students if many celebrities offered a feasible alternative to heroes. Most in attendance offered a resounding “No!”
Dr. Cumiford argued that technology’s role in the shift away from heroes might have to do with the hero’s relationship with time. As an example, Dr. Cumiford cited the fictionalized story of George Washington cutting down a cherry tree before confessing his deed, stating, “I cannot tell a lie.” The embellishments to this and similar stories of well-respected or heroic figures contribute a sense of nostalgia not available to modern celebrities, whose overly scrutinized fame seldom lasts the requisite “15 minutes”. Dr. Cumiford suggested, “Most of the contributions that are historically recorded, or real, are not really that interesting or exciting [in comparison to the embellished tales].” NAC student Jacqueline Martinez, a senior at Santiago High School, replied, “I think it’s because we’ve created a society that focuses on physical perfection rather than moral character.” Jacqueline’s observation about the premium placed on beauty, a physically finite quality, resonated with Dr. Cumiford’s comment that celebrities are often “casualties of time,” especially in the public eye.
Dr. Cumiford closed the conversation by suggesting that students consider how they’re influenced by technology, how media shapes their beliefs, and how they might focus on substance rather than “sparkle” when reevaluating their values.
Click HERE to watch a video of the event.
Dec 16adminNo Comments