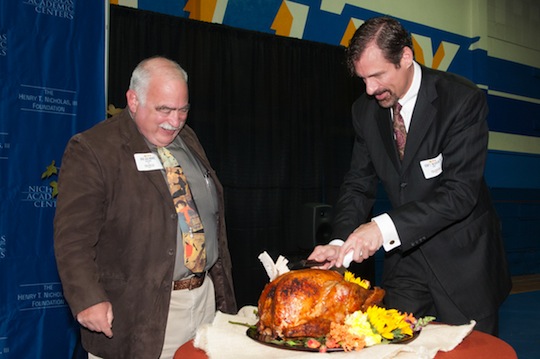 (From the official press release): SANTA ANA, CA.—NOV. 20—The Nicholas Academic Centers (NACs) celebrated record student achievement last weekend at their fourth annual Thanksgiving Dinner event for more than 300 inner-city high school students and their families. Broadcom (NASDAQ:BRCM) Co-Founder and former CEO Henry T. Nicholas, III, Ph.D. and Santa Ana Mayor Miguel Pulido praised the “NAC Model”—a nurturing educational “family” that combines personal tutoring, cultural enrichment and social and family support for underserved high school students.
“The NACs succeed where others fail because we create a support system that includes students, staff, parents and high school counselors,” said Dr. Nicholas, who established the first center in 2008 with retired Superior Court Judge Jack Mandel. “It’s a model that works. One hundred percent of our students go on to college, and we’re going to ensure that every one of them earns a degree.”
Congresswoman Loretta Sanchez (D-47) sent a statement of support from Washington, D.C. to the gathering at Valley High School and will speak to NAC students at a special event in Santa Ana on Dec. 10. “Education is the foundation of opportunity and the basis of our country’s future economic success,” Sanchez said. “The Nicholas Academic Centers produce dramatic results and provide a successful model for school districts around the country to follow.”
Last summer, a former NAC student who attends Georgetown University interned  in Sanchez’s Washington, D.C. office, and in May the congresswoman honored a NAC student at the Capitol who had placed first in a national competition (“Cooking Up Change”).
Currently, 231 NAC alumni are attending top colleges around the country, such as Notre Dame, Georgetown, UC Berkeley, UCLA, and Smith College. Half of the students from the first NAC class are set to graduate from college this year and 87% will graduate within five years. Among Hispanic students nationally, only 13% finish college, according to the National Center for Educational Statistics (NCES).
NAC students have earned more than $3 million in scholarships and financial aid.
“The Nicholas Academic Centers are profoundly changing education,” said Mayor Pulido at the event Friday. “At Broadcom, Dr. Nicholas used brilliance and drive as a pioneer in the technology industry. Now, in collaboration with Judge Mandel, he has created an inner-city program that rivals the achievements of the nation’s best private schools.”
In a statement, Thelma Meléndez de Santa Ana, Ph.D., Superintendent of the Santa Ana Unified School District, voiced her support for the NACs:
“We are fortunate to have many innovative partnerships in our district, and none more important than our work with the Nicholas Academic Centers,” the Superintendent said. “The Centers have a profound impact on our students and demonstrate how we can work together to prepare all of our students to be college and career ready, and to assume their roles as part of the global citizenry.”
At the dinner celebration, NAC alumna Ivonne Huitron, now a junior at UC Irvine, told attendees how the NAC “family” has changed her life.
“I don’t know where I would have been if it were not for NAC,” said Huitron, who is majoring in Public Health and thinking about going to medical school or being a teacher. “Now I’m in college and looking forward to a brighter future. From my heart, I am so grateful to everyone at the NAC.”
Among other NAC milestones:
· The NAC’s 100% college enrollment rate far exceeds the 72% of all California public school graduates who continue on to college. More dramatic is the comparison nationally with Hispanic high school graduates, of whom only 59.7% went directly to college in 2010, according to the NCES.
· To date, 95% of NAC graduates who went on to four-year colleges are still enrolled. This contrasts with nationwide sophomore retention rates for all students of less than 80%, and only 47% for Hispanics, according to the College Board.
· About 25 of NAC alumni now in college are benefiting from the California Dream Act, under which undocumented immigrant students can qualify for financial aid, and the federal Deferred Action program, which enables young, long-time immigrants to avoid deportation.
Click HERE to watch the video.
Nov 20adminNo Comments

← The NAC at NACAC: Sharing the NAC’s Role within an Educational Village on a National Stage
→ Class of 2012 NAC Alum Rudy Santana’s New York Times