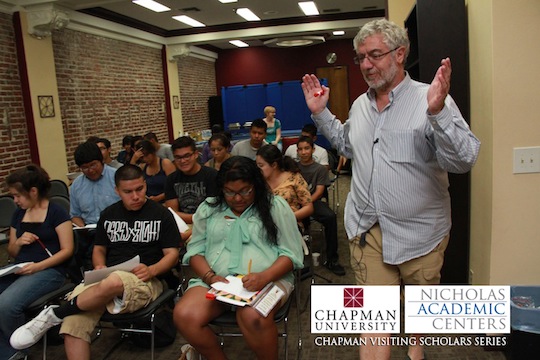 On Saturday, September 22, the Nicholas Academic Centers’ presentation of the Chapman University Visiting Scholars Series returned for the third year. To lead off the new series, Chapman University’s Chancellor, Dr. Daniele C. Struppa, talked with NAC students about having fun with mathematics.
Dr. Struppa opened the lecture by telling students how he fell in love with math at the age of five years old. “I remember the first time I saw the number two, and I just loved the number. I thought it was so beautiful.” Originally, he was disappointed to learn that numbers began to repeat after nine, so he created his own squiggly numerical shapes; however, he soon learned the importance of having a system in place when he was unable to add his random shapes together. It was then that he realized he had become fascinated with the “strange” patterns that work in math and his mathematical curiosity has never waned.
During the lecture, Dr. Struppa demonstrated a number of mathematical magic tricks, which he used to explain basic math principles. Among the topics he covered, Dr. Struppa discussed Digit Checks and Greatest Common Denominators. In one exercise, Dr. Struppa used the Permutation Formula to know which color marker the students had chosen while he looked away.
The exercise involved standing three different color markers in a row, each representing a specific number: 1, 2, and 3; in this case, the markers were green (1), black (2), and red (3). While the challenger, Dr. Struppa, looked away, the “shuffler”, NAC student Evelyn Hernandez, chose and held up a black marker to inform the audience of her choice. Evelyn then shuffled the other two markers without telling Dr. Struppa which changes she made. For the next three changes, Evelyn informed Dr. Struppa which marker positions she was switching, such as 2 and 3, 3 and 1, and so on. When the markers eventually returned to their original positions, Dr. Struppa was able to name the marker Evelyn had chosen. When Dr. Struppa said, “I believe you chose the black marker,” the audience gasped in amazement at the apparent trick.
Dr. Struppa then explained the permutation formula and offered tips on how to keep track of the changes. NAC student Eduardo Anaya was the first to test his new understanding of permutation. By following Dr. Struppa’s tips and keeping track of the shuffling markers, Eduardo was able to figure out which marker NAC student Marilynda Bustamante chose while he looked away. Again, the audience was impressed.
After the lecture, NAC student Jean Paul Escobar described the latest installation of the Visiting Scholars Series as eye opening in the sense that recognizing patterns in math is similar to recognizing patterns in communication. “When you start to recognize the mathematical patterns that occur when you solve math equations, it’s like recognizing patterns when you communicate with people, like understanding body language, understanding how people communicate through emotions. You recognize these patterns just like you recognize patterns in math.”
Click HERE to watch the video.
The next Chapman Visiting Scholars Series is scheduled for October 20, 2012.
Sep 25adminNo Comments

← NAC Class of 2010 Alum Jesus Cendejas: Looking for a Sign and Finding a Calling
→ 55 Minutes by Bike: NAC Student Alex Aguilar Is Pedaling Toward a Brighter Future