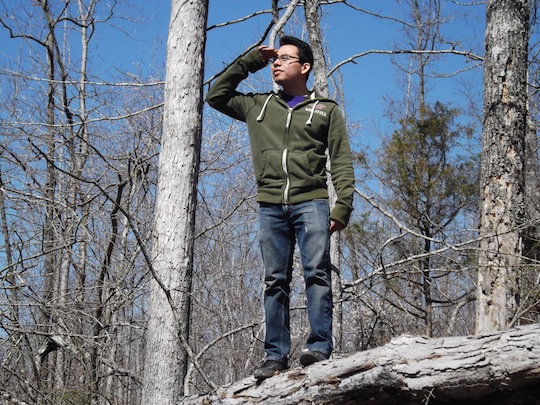 NAC Class of 2010 Alum Jesus Cendejas: Looking for a Sign and Finding a Calling

Since he left Santa Ana for Morningside College in 2010, NAC alum Jesus “Chuy” Cendejas has been on a journey that he didn’t see coming. Jesus decided early on to major in Nursing so that he could help others, and he quickly became involved in the community. He is the Peer Minister for Campus Ministries at Morningside College, and he has volunteered his time to aid humanitarian and disaster relief efforts in Shiprock, New Mexico; Tuscumbia, Alabama; Mapleton, Iowa; and Cedar Rapids, Iowa. Jesus also volunteers at a soup kitchen and homeless shelter in Sioux City, Iowa, and participates in other local charity organizations. Jesus knew he wanted to get involved, but he didn’t know how it would affect his studies. While at Morningside, Jesus has changed his major no fewer than two times, which is more common than many people realize. Combining his academic interests with his personal convictions, Jesus contributes his current goal of becoming a pastor to the experiences he has gained during his time in Sioux City, Iowa, studying at Morningside College and working with a number of church and community service groups.
NAC: Now that you’re starting your junior year at Morningside, you’re in a place you didn’t anticipate being when you were a freshman. Talk about the process of changing majors and getting from day one to now.
Jesus: The changes in my field of study were unexpected; I had many plans and opportunities presented to me through Nursing. I know that my passion is to work with many people and give them comfort and support, whether it be physical, emotional, psychological, or spiritual. My involvement in school and things that I am in charge of, which I have a great heart for, influenced my decision to change, along with my involvement in the Sioux-land area (community).
Although I loved nursing and working with the elderly in the nursing homes during my sophomore year, I realized that my life was quickly being consumed by work, not in a bad way, but in a way that prevented me from reaching out in other areas where my desire and heart was. By the end of my first semester, I knew that I had to make a decision about which path I would take in regards to my life and in distinct areas, one of them being academic.
After several meetings with my advisors and counselors, I made a decision to switch my major to Developmental Psychology, where I would be exposed to all the stages of a person’s life. My aim was to be in ministry and work with the church and private organizations in the city to serve and help people. Developmental Psychology would expose me to people’s entire lifespan so that I would have a better understanding, from a psychological standpoint, of how to work with everyone.
During the summer, I met my pastor, Tim Hall, who pastors a Calvary Chapel church in South Sioux City, Nebraska. He’s originally from Anaheim, California. Our connection was immediate and our relationship reached great depths rapidly. I then decided to stay in Sioux City to do ministry. All of this is important because as I witnessed the impact and changes in my life and those around me, I realized where my heart was, which is what influenced me to switch my major to Religious Studies. This major is more from an academic/scholastic perspective, but nonetheless will challenge and better prepare me for the calling in my life.
NAC: Have you experienced any challenges during your journey, or have there been consequences that have challenged you to let go of the path you were on?
Jesus: Changing majors and sticking to a path that I know is right has been difficult. I put in hard work in some classes that won’t help me in my major, but I’ve learned to enjoy the journey. Now it’s a matter of focusing on those things I know will help me these two final years at Morningside. Taking charge of my leadership position has also been demanding, yet gratifying. I try to live a blameless life and serve as an example to those around me. My faith has been challenged in my time here, but it has helped me grow as an individual. The most recent challenge has been to realize that I am not going back to California after college. It is a big step, but my heart for the Midwest has increased. I will miss my family and the place I grew up, but even so, it really is home here, and I enjoy it. I know much awaits me after college, but I know it is for the best. I’m just excited to get through and make each day count. I know each day will not be perfect and will present its own challenges in different aspects of my life, but I know that Christ will continue to help me through it all as He has thus far.
(Photo Credit: Kathy Martin)
Sep 19adminNo Comments