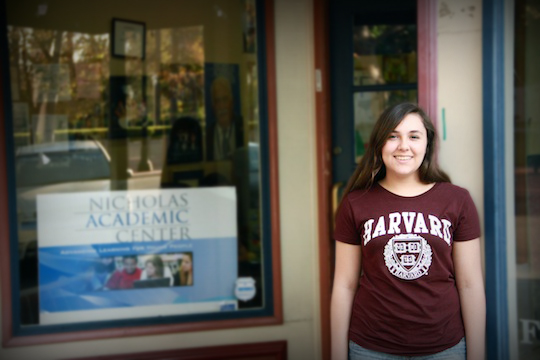 From a very young age, Katherine Mitchell dreamed of going to Harvard University. Initially inspired by Harry Potter’s fictional experience in Hogwarts, Katherine’s interest in education and her desire to attend Harvard grew intertwined like Ollivander vines over the years. Back in February, when Katherine learned she had been accepted to participate in Harvard’s “Secondary School Program”, her dream of attending Harvard quickly turned into reality; however, despite available financial aid, the high cost of the program nearly denied Katherine the opportunity. Fortunately, significant contributions from The Henry T. Nicholas, III Foundation, Judge Jack K. Mandel, and Judge Edward J. Wallin helped make the trip possible. As a result, for six weeks, from June 25 to August 10, Katherine earned undergraduate college credits as a Harvard student.
Katherine left Santa Ana with her parents a week before the program started, on June 18. After arriving in Boston, they stayed at a bed and breakfast in Central Square, one stop from Harvard Square when riding the red line on the “T”, Boston’s subway system. During the week, Katherine stayed busy on and off campus, taking care of last minute details, waiting in immunization lines and filing paperwork; when the weather permitted, the family ventured outdoors in search of Boston’s best fish ‘n’ chips. A couple days before Katherine’s parents returned home, they found a restaurant whose fish batter recipe beat all others. Ironically, the restaurant turned out to be California-based. Katherine jokes, “We travelled to Massachusetts to eat at a restaurant from California.”
Of all the landmarks in Boston, Katherine preferred Harvard’s very own Widener Library. During the six weeks of classes, Katherine kept a busy schedule, dividing her time between classrooms, the library, and the dorm, but the library was her favorite. Katherine comments, “It’s just so big and so old. There are books I found from the early 1800s! We were allowed to look through the books and check them out. When the books are torn or damaged, they are stored in boxes, but students can still access them.”
On Mondays and Wednesdays, Katherine attended Professor Ellsworth Lapham Fersch’s class, “The Insanity Defense” from 8:30 to 11:30 AM. “We focused on the legal aspects because [the insanity defense] is an actual defense that lawyers can use. We learned about the M’Naghten (often spelled McNaughton) test and what one needs to actually invoke the defense; it’s a last resort defense, really, because you know your defendant committed the crime, but you’re saying it’s because he’s mentally ill.” She adds, “Mainly, we learned that insanity is a legal word, not a psychological or medical term. People often use it improperly.” The course load included reading three books (Thinking About Insanity, Religion, and Terrorism, Thinking About the Insanity Defense, and An Introduction to Forensic Psychology), taking written tests, and writing a ten-page term paper.
Tuesdays and Thursdays found Katherine taking Professor Thomas Derrah’s Introduction to Acting course, from noon to 3:30 PM. Although the “Insanity Defense” class demanded more of Katherine academically, she found the acting class to be the most challenging: “I like acting, but, getting up in front of people I don’t know and letting go of all of the social barriers we have to keep up to survive in this world, it’s really hard.” During the six weeks Katherine attended the class, she participated in several improvisation games, including a word-association exercise in which students had to say a word and then point to someone to continue the line of words; the tricky part, according to Katherine, was bringing the game full circle and ending with the first word given. If the game started with the word “peacock,” it also had to end with “peacock.” Ultimately, the games paid off. Smiling, Katherine states, “My final went well. We had to choose a genre of music we don’t like and then interpret a song from that genre. I chose Country.” Although she wasn’t overly familiar with the genre, Katherine remembered listening to Carrie Underwood’s “Before He Cheats” in sixth grade, and it seemed ripe for interpretation. While another student decided to put on a puppet show, Katherine improvised a phone call to a friend about the song’s subject matter. Before the scene ended, Katherine hung up the phone and performed a country-themed soliloquy. “My professor loved it!”
In the spaces of time not dedicated to studying, Katherine developed a bond with a group of her fellow Harvard Secondary School Program colleagues. “All of the girls on my floor, there were seven of us, became really good friends,” Katherine says. Early on in the program, Katherine joined a few of the girls and walked door to door through the dorm, introducing themselves to anyone who answered the door. Eventually, the group of five grew to twenty, as more and more students joined the traveling ensemble. While sharing this story, Katherine recalls other roving groups that stood out during her stay at Harvard: Tourists. “Because I lived on the first floor, I could always hear the tours going by. It was always the same spiel.” In her best blue-blooded accent, Katherine impersonates a tour guide discussing the “Statue of Three Lies”. While trying not to laugh, she says, “The three lies are, number one, this is not John Harvard, but a friend of the sculptor. And they would continue.”
After returning home, Katherine found herself wanting to go for a walk through Harvard Square and then remembering it was over 2,500 miles away. She states, “The trip was surreal. Harvard pulls a part of you in and keeps it.” If she has her way, however, Katherine might someday return to Harvard to attend school on a more permanent basis and pursue an undergraduate degree.
(From the archive: read about Katherine’s acceptance into the Harvard Secondary School Program HERE).
Sep 03adminNo Comments

← From Humboldt to Hampshire to Harvard with Class of 2009 Alum Javier Robles
→ NAC Class of 2010 Alum Jesus Cendejas: Looking for a Sign and Finding a Calling