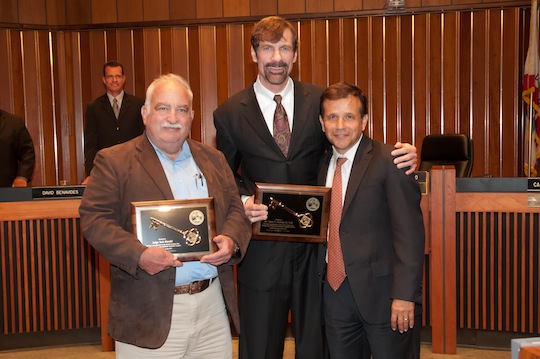 On July 2, City of Santa Ana Mayor Miguel A. Pulido presented Nicholas Academic Centers (NAC) Co-Founders Jack K. Mandel and Dr. Henry T. Nicholas, III keys to the city of Santa Ana. Mayor Pulido recognized Dr. Nicholas and Judge Mandel for their outstanding contributions to the community. The recent ceremony marks the first time in ten years that the city has given the award. The last key to the city went to the late Renee Segerstrom.
In an article posted on newsantaana.com, Mayor Miguel A. Pulido commented, “The Nicholas Academic Centers are transforming education as we know it.” He added, “Dr . Nicholas and Judge Mandel have already profoundly improved the lives of hundreds of families here in Santa Ana, and I am confident that will affect thousands, if not millions, nationally in the future.”
A quick look at the numbers justifies the Mayor’s claim. Since opening in 2008, the NACs have graduated 232 students. 96% of NAC graduates attending 4-year institutions are still enrolled in colleges and universities across the United States, including the University of Notre Dame, Georgetown, Pomona College, Brandeis University, and UCLA, among others; this compares to the national average of a 77% retention rate. All of this year’s 82 NAC graduates will attend college in the fall, which again compares to an average of 61% for Hispanic graduates nationwide. Moreover, NAC students have earned $2.7 million in scholarships and financial aid, as well as over $600,000 in direct-gap funding provided by the NACs.
Genesis Luviano, a class of 2010 NAC alum and current junior at Smith College in Massachusetts, says, “There is no way I could afford college without [the NAC’s scholarship]. The NAC has helped me by providing more than just monetary support. It has also provided me with a network of people that support me and that I can go to with anything.” When told that Dr. Nicholas and Judge Mandel received Keys to the City of Santa Ana, Genesis added, “These two individuals most definitely deserve the Keys to the City of Santa Ana because they are helping its youth with the main keys of advancement and more,” citing the program’s multi-faceted approach to education with academics, mentoring, cultural enrichment opportunities, and higher education support.
Perhaps Dr. Nicholas said it best when he stated, “The pursuit of academic excellence should not be reserved only for a privileged segment of our population. By aggressively redefining the way our nation’s academic system serves American students, we can provide opportunities to every student who strives to succeed.” Such is the NACs goal.
Congratulations, Dr. Nicholas and Judge Mandel.
Jul 17adminNo Comments