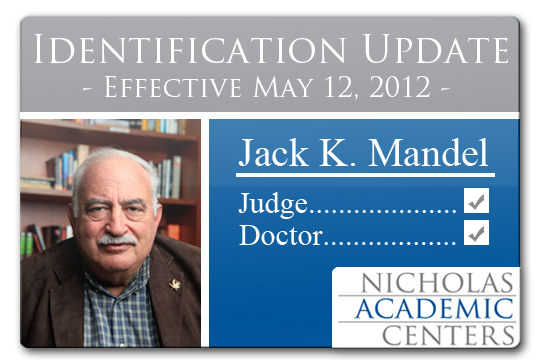 12 years after retiring from the bench, Judge Jack K. Mandel donned the robe once more. Unlike the robe he wore during his 19 years as a Superior Court Judge, however, this robe was of the graduating kind.

On Saturday, May 12, the Hon. Jack K. Mandel received an honorary Doctor of Humane Letters degree from his new alma mater, Morningside College in Sioux City, Iowa. Morningside recognized Judge Mandel with the honorary degree for his work with high school students in Santa Ana, California. During the commencement, Dr. Mandel spoke to more than 250 graduates on the campus lawn in front of the Hickman-Johnson-Furrow Learning Center. In his speech, Dr. Mandel thanked the board of trustees & the President of Morningside College, his wife Judy for her full-time support, and Dr. Nicholas for his passion & generosity. “Because of what Dr. Nicholas has provided,” said the Judge, “[NAC students] will play a prominent role in their community for the next 40 years; they are tomorrow’s leaders.”

Ten Santa Ana-area high school graduates who were part of the NAC are enrolled at Morningside College with several more to join this fall. Each of their journeys represents a page in the ongoing NAC story.

The story of the NAC, though, begins with the story of the Honorable Jack K. Mandel, and a group of students since dubbed the “Judge’s Kids.” Years ago, the Judge saw a need – students without a proper place to study, minimal guidance, and extremely limited resources to make college much more than a faint dream – and he took action.

Every day, after concluding his court cases at the Orange County Courthouse, Judge Mandel spent his time tutoring and mentoring students in the library of Santa Ana High School. At 7:00 PM, when it was time to close the library, the Judge treated students to a ride in his Jaguar, and he drove them home. He also spent time with his “kids” on weekends, often taking them canoeing around Balboa Island in a canoe named “Fred”.

The “Judge’s Kids” thrived with help and support from Judge Mandel, guidance counselors, and a network of colleges. The Judge’s actions caught the attention of Dr. Henry T. Nicholas, III, and the Nicholas Academic Centers was born. In addition to Judge Mandel’s illustrious career as a trial lawyer and Superior Court Judge, his work as a mentor, co-founder and now chairman of the board for the Nicholas Academic Centers has earned him a new title: Doctor.