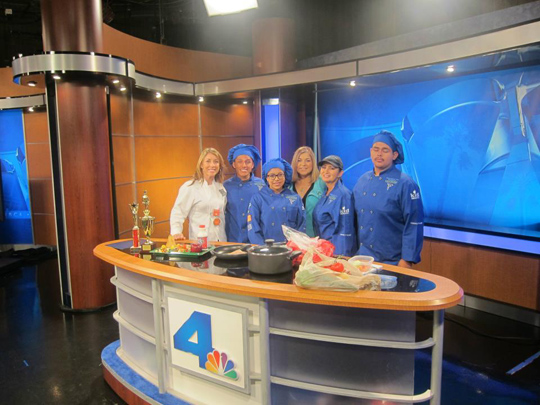 Some people spend years searching for their passion, trying to find purpose in their actions and take happiness as a reward; others recognize it early on. Whether or not the realization comes quickly or takes years to reveal itself, its arrival lends reason to celebrate. For NAC senior Ashley Blanco, the celebration has already begun. After taking a culinary class at Valley High School during her sophomore year, Ashley realized she likes working with her hands, especially in the kitchen. She finds delight in learning new recipes and then switching things up to make them her own. What’s more, she’s good at it.
Recently, Ashley and her classmates/teammates, Alex Hernandez and Ivan Lopez capitalized on their culinary skills and entered the “Cooking Up Change” competition, a national campaign created to advocate for “policies and practices that allow all students, teachers and staff to learn and work in a healthy school environment.” This is the campaign’s first year in California, an expansion made possible by sponsorships from Kid Healthy and Northgate Markets.
The first level of competition took place in March at the state level. For the competition, the team was lead by mentor and celebrity chef, Katy Clark, as well as Valley’s very own culinary instructor, Monica Aguilar. On getting Chef Katy’s help, Ashley states, “She heard about what we were doing, working with limited items to make a nutritional meal that cost less than one dollar in order to be served at school, and she got involved.”
Deciding what low-cost, nutritious meal to prepare for the competition proved no easy task. According to Ashley, “It was hard because you had to work with foods found in the cafeteria and you had to work with those ingredients only.” The team’s first reaction? “I don’t know what to do with this.” Chef Katy brought in magazines so that the team could look at recipes and find dishes that would actually fit together and, as Ashley puts it, “add a nice vibe to the meal.”
The first draft included a carrot soup, a broccoli side, and lasagna or pizza as the main course; however, Chef Katy stepped in and encouraged the team to make the meal as healthy as possible. With Chef Katy’s input, Ashley adds, “We went with lemon and spinach chicken, Tuscan bean salad, and cinnamon poached pear.” Ashley also noted, “[The people from ‘Cooking Up Change’] told us to include protein, fruits, and vegetables, so we said, ‘Okay, we’re going to have chicken with spinach and a roasted tomato; it helped us decide which ingredients to use.’”
Ashley was initially concerned with the choice to include the poached pear because of a previous competitive experience in the “Pro Start” competition. “In the ‘Pro Start’ competition, I remember one of the judges saying that everyone does the poached pear because it’s easy; it doesn’t require cooking or ovens, yet no one ever gets it right.” Having limited resources and very little time to prepare the dish complicated efforts to get it right, but the team pulled it off. One motto the team stuck to throughout the competition: Keep it simple.
The team won the state competition and moved on to the national competition in Washington D.C.  Six different states were represented in the competition, with Ashley’s team representing California. In addition to the victory at the state level, the team’s experience with the “Pro Start” competition gave them confidence for the national competition. “The hardest part [about “Pro Start”] was that you only had an hour to make the whole dish, and they were right there with their boards, checking your skills. It was intense, but it really did help us for ‘Cooking Up Change.”
The trip to D.C. was not all business, however. Ashley says, “It was great because I got to travel.” Her favorite part about the trip? “My favorite part was sightseeing and visiting the museums. I especially liked the museums because I like learning about history.” She adds, “Right in front of the White House, there’s a lady that protests, and she’s been there since 19-something, and the last time she was featured in an article was during the last century. She protests against nuclear bombs. It’s weird because she’s always there, and you always see the White House on the news, but they never show her. I became more interested in her story than the White House.”
Ashley also made new friends, whom she may or may not be related to. “When we arrived, we met the other teams. Then, at the hotel, they had us do an icebreaker to get to know each other. I met a girl whose mom is from the same pueblo in Mexico as my mom. They’re both from Guerrero.” Ashley laughs, and continues, “We tried to figure out if we were related because we looked similar.”
When the time came, the team prepared their dish with precision and won the national competition. The victory has reinforced Ashley’s decision to make a career in culinary arts. She also cites other sources of inspiration. “If it wasn’t for the culinary program at Valley, I still wouldn’t know what I want to do. I’ve realized I’m a hands-on learner, and I prefer working with my hands. Last year, when I was asked what I want to do after school, I decided I like cooking, and I’m going to stick with it.”
After winning the competition, the team appeared on NBC’s “Nonstop News LA” and shared their experience. Between the State and National competitions, the winning team received a paid trip to Washington D.C., $1000 scholarships, a $200 gift card, a free meal from a restaurant of their choice, and free cookware from Tefal. They’re still trying to decide who will keep the trophy, but soon the team’s lemon and spinach chicken meal will be served to students at Valley High School.
Jun 04adminNo Comments