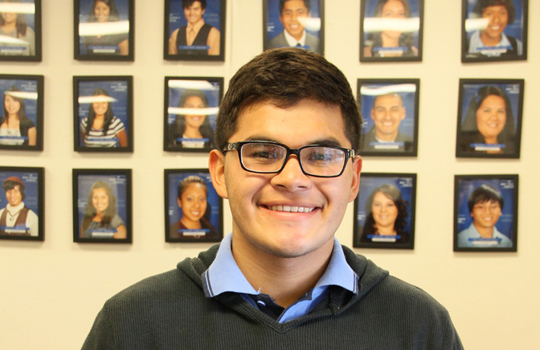 Valley High School in Santa Ana had one space available, one chance for a male junior to participate in the American Legion’s Boys State program, held this year at Sacramento State University, in Sacramento. According to the American Legion’s website, “Only those who illustrate leadership, character, scholarship, loyalty and service in their schools and community should be considered.” Karen Bluel, now in her 26th year as Valley High School’s Choral Music Director, and a veteran of nominating Girls and Boys State participants, recognized such qualities in Hector Valencia, a three-year veteran of the Nicholas Academic Centers.
According to Karen Bluel, Hector is “a young man wise beyond his years” who likes to share with classmates. While taking Men’s Chorus during his freshman year, Hector made an impression on Bluel and the students because he would often come into class and ask if anybody had been keeping up with the news: “He would spark a short but always informative discussion among the men about topics of interest. This is his third year as one of the leaders of the Valley Men’s Chorus, and if he is absent (which is rare), the guys always miss his ‘current events’ updates.”
Hector competed with Valley High School’s top performing juniors for the opportunity to participate in the Boys State program. After completing the application and writing two personal statements, Hector found himself sitting in front of an interview panel. During the interview, he really began to feel the pressure, but he used humor to carry him through: “In my mind, I gave them a great time in that interview. Whenever I struggled with a question, I made them laugh long enough for me to think through my answers.” He also used clever analogies. When asked why he would make a great candidate for the program, Hector responded, “I feel I have more to give. I don’t want to just be a guy living in a house in the neighborhood; I want to be the guy living in the house with the beautiful garden in the neighborhood.” What better way can one communicate a message of promoting positive change than to set the example at home?
When Hector isn’t busy attending classes or studying at the NAC, he serves as President of Youth Alive, a bible study club on campus, and he teaches young kids to swim and play water polo in the Valley High swimming pool.
For one week each year, the American Legion hosts the Boys State and Girls State programs in every U.S. state except Hawaii. This year, Hector will join the program during its run from June 16 to June 23 in Sacramento. It is rumored Hector has already set his sights on being selected for Boy’s Nation!
Apr 02adminNo Comments