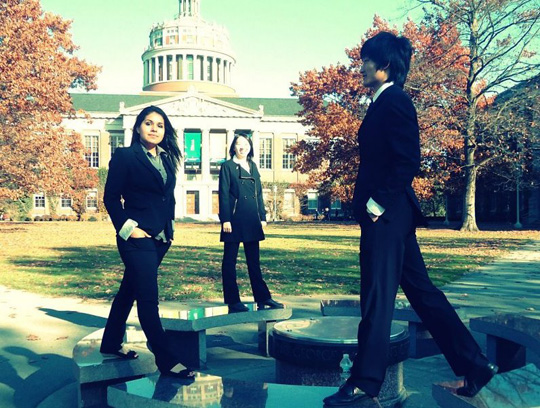 NAC Alums: Catching Up with Class of 2009 Alum Elizabeth Moreno

2,500 miles from her hometown of Santa Ana, California, Nicholas Academic Centers’ class of 2009 alum, Elizabeth Moreno, has used her time at Allegheny College in Meadville, Pennsylvania, to build an impressive resume and create opportunities that will soon take her around the world.
Upon her arrival to Meadville, Elizabeth realized she would have to adapt to small-town living. Meadville’s population of just over 13,000 people, 1% of whom are Hispanic, offered a different backdrop to Elizabeth’s experience in comparison to Santa Ana, a city made up of 340,340 people, 79% of whom are Hispanic. Moreover, there is the matter of the weather: “The first winter wasn’t so bad, until the snow didn’t stop for six whole months.” She missed her friends and the warm Southern California sun, but she still found a way to thrive.
One thing Elizabeth had in common with the “strangers” at Allegheny is a passion for education.  This connection proved a gateway for Elizabeth to share her culture with others while learning about theirs: “My college adventure opened so many doors that I never knew existed. I met people from different backgrounds, states, and cultures.” She soon found herself more than occupied with campus life, taking a full load of classes, joining organizations like Union Latina, Sister Circle, Alpha Phi Omega, and A5 (Association for Asian and Asian American Awareness), and working ten hours a week in a Neuroscience lab.
During the fall of her junior year, Elizabeth served as an Allegheny Ambassador and participated in the “Early Leaders Case Competition” at the Simon Graduate School of Business. The 24-hour case competition challenges participants to think critically, analytically, and creatively. With three other people from different colleges, Elizabeth “created a fifteen minute presentation, constructing a solution to tackle problems facing Zara, a retail store.”
This semester, Elizabeth is studying off-campus in Philadelphia at The Philadelphia Center, a program that “provides internship experience and experiential learning for students.” “As an economics major,” says Elizabeth, “I felt this program would be the best choice for me [and] interning at the Bureau of Labor Statistics has provided me with so much knowledge of the organizational structure of the government.” She adds, “For 32 hours a week, I get to network with a team of economists and have already learned new techniques and programs.” Elizabeth also contributes to the TPC blog when she’s not tracking her experiential learning adventure or maintaining her own blog.
Elizabeth encourages future NAC alumni to take full advantage of school resources and always network with other students and faculty. As a result of her networking, Elizabeth will soon travel to India as part of an experiential learning program offered through Allegheny College.
Mar 18adminNo Comments