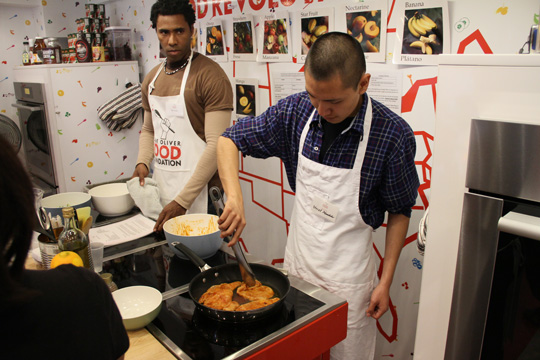 Students of the Nicholas Academic Centers are taking part in a “food revolution.” A dozen NAC students are participating in a five-week course aboard the “Big Rig,” a mobile cooking and nutrition school funded by the Jamie Oliver Food Foundation and The California Endowment.
The first class focused on teaching students to limit their sugar intake and make nutritious breakfasts, like the “All-American Pancakes” and the “Simplest Fruit Salad.” Chef Henry Perez noted that adults shouldn’t eat more than five to eight teaspoons of sugar per day; he then taught students to convert the grams of sugar marked in the nutritional information section on food packages to teaspoons (one teaspoon equals four grams). Most students poured a portion size of cereal that equaled four serving sizes, dramatically increasing their sugar intake. A portion size of Frosted Flakes included a serving of 16 teaspoons of sugar, twice the daily allotment. After a quick demonstration, students worked together to make a healthy breakfast of pancakes and fruit salad. According to Jose Hurtado, a student participating in the class, “The pancakes were really easy to make. My mom would be shocked if I made her a meal like this.”
The second class continued in similar fashion to the first, exposing potentially dangerous amounts of sugar and fats in snacks like candy bars, Cheetos, and gummy bears, and then offering healthier alternatives like all-natural fruit chips. The Food Revolution crew also encouraged students to monitor their sodium intake, noting that an unassuming product like ketchup contains surprisingly high levels of sodium, as do go-to snacks like instant noodles. Moving in natural progression from the first lesson, which featured a breakfast meal, the second class introduced a healthy lunch: barbecued chicken (made with homemade bbq sauce) and an everyday green chopped salad. Students broke into groups of three or four and prepared their meals, being careful not to cross-contaminate any food or utensils, especially when working with chicken. The end product resulted in a healthy, tasty bbq-chicken-and-salad pita sandwich.
NAC students will participate in three more classes before earning the Jamie Oliver Food Revolution program completion certificate.
Mar 16adminNo Comments