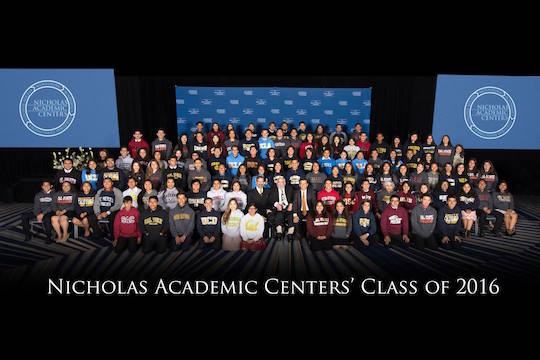 The significance of the moment hit him when he crossed the stage at the Nicholas Academic Centers’ 8th Annual Graduation Celebration and reached out for his college sweater. Long Nguyen, a Class of 2016 NAC Scholar and Valley High School graduate, quickly realized, “I’m going to USC.” It was a moment and realization years in the making. Alongside Long, 124 fellow NAC Scholars walked across the stage in the Grand Ballroom at the Marriott Hotel in Irvine, California, to shake hands with NAC Co-Founder & Financier, Dr. Henry T. Nicholas, III, and collect their college sweaters, NAC stoles, and NAC diplomas. As in previous years, 100% of this year’s graduating class is scheduled to enroll in postsecondary education immediately after high school.

The ceremony centered on the graduates who celebrated in the company of their parents, younger siblings, school administrators, community leaders, and other stakeholders. 95% of the graduates are the first in their families to attend college, and their journeys to find academic success depended largely on the support of those in attendance.

One of the evening’s student speakers, Class of 2016 graduate Carlos Gonzalez, who will attend Cornell University with fellow NAC Scholar and student speaker Adriana Herrera, thanked his mother and fellow scholars for helping him achieve success: “I grew up with a single parent, a hard-working woman who has sacrificed herself for her children. She has not only been a good mother, but a great father, too. I am very fortunate.” Inspired to make worthwhile his mother’s sacrifice, Carlos stated, “Our accomplishments have been barrier-breaking, but we need to break some more by completing our undergraduate studies and obtaining careers that will change lives.”

While it can be difficult to dedicate the extra hours needed to refine their academic profiles and prepare for college, luckily, the relationships forged between NAC Scholars make the NAC feel like a second home, as noted by the other student speaker for the night, Class of 2016 graduate and USC-bound Sandy Andres. Having attended the NAC since the summer before her freshman year of high school, Sandy notes, “It has been a transformative journey.” While spending many late nights at the NAC studying for SATs, applying to colleges, and sometimes simply chatting with friends, Sandy found a place that allowed her and fellow scholars to support one another in both happy and difficult times. Sandy is the youngest of three siblings who have graduated from the NAC, so attending the NAC for Sandy was truly a family affair: “I am following in the legacy of other NAC Scholars, who in my case, are my siblings.”

The accomplishments of our 125 NAC scholars are nothing short of remarkable. This year’s graduating class earned acceptances into over 90 colleges and universities, including Harvard, Cornell University, MIT, Notre Dame, UCLA, USC, and Berkeley to name a few. NAC Co-Founder & Financier, Dr. Henry T. Nicholas, III, commended NAC Scholars for overcoming economic and cultural barriers and “crushing” the statistics for college admission retention. Approximately 80% of the NAC’s Class of 2016 will enroll directly into a 4-year fully accredited university, compared to a National average of 42% and only 26% for Latinos according to the National Center for Education Statistics. To further highlight the accomplishments of our graduates this year, it is necessary to note that four NAC scholars were awarded the prestigious Gates Millennium Scholarship. Notable scholarship recipients were as follows:

Since the NAC’s inception in 2008, our program has mentored and guided 727 students through high school and enrollment in college. Locally and out of state, NAC scholars are able to flourish in any college environment. To date, our scholars have been awarded a total of $33 million in the form of grants and scholarship funding. Our students’ baccalaureate degree completion rates for 4 and 5 years are 56% and 75% respectively, compared to the national average of 39% and 55%, according to the National Center for Education Statistics.

The annual NAC alumni speaker was 2012 NAC alumna Katrina Linden, who received her undergraduate degree from the University Of Notre Dame this summer. Katrina talked about the emotional journey many NAC scholars may experience before embarking to college, but she reminded them of their resilience: “Like you, and like others before us, I was equally excited and nervous about starting my first year of college. In college and in life, you will get rejected so many times you might lose count, but there will be another internship, another paper, or another round of tests, and another chance to prove to yourself that you are capable of accomplishing amazing things.”

As the evening drew to a close, Marc Contreras, a Class of 2017 NAC Scholar and rising senior at the Samueli Academy, reflected on the night’s events. After watching many of his friends walk across the stage, Marc shared that he felt inspired and confident about his future: “Many of my friends are first generation students like I am, and if they can do it, I can do it.”