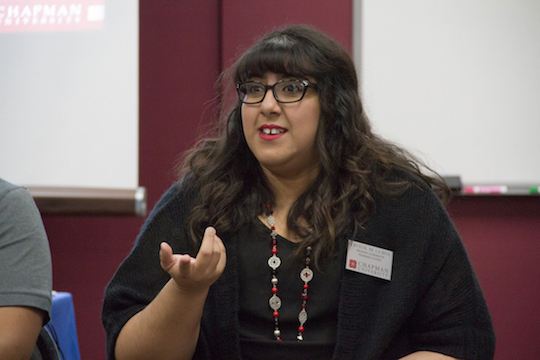 The change in conversation, from “can they” to “they will” go to college, adds a layer of complexity for first-generation college students. Crystal De La Riva, Academic Advisor and Promising Futures Program Coordinator at Chapman University, and Enrique Campo, graduate student at Chapman University focusing on marriage and family therapy, spoke on the Cultural Implications on Student Stress Management and Self-Care on Saturday, April 23 at NAC 1.

De La Riva is familiar with this topic as she was the first in her family to attend college, earning her B.A. in psychology and now working towards her master’s degree in marriage and family therapy at Chapman University. As a first-generation Chapman Alumna, she understands the learning curve associated with adapting to the college environment and seeks to help other first-generation students at Chapman University get the most out of their college experience.

Crystal opened the lecture by asking the students if they knew about the different types of stress that humans go through. Crystal then broke down the basic types of stresses, listing them as follows: physical, intellectual, emotional, spiritual, and social. She explained that stress isn’t always bad as there are positive and negative stresses that we all go through. After explaining the dynamics of stress and sharing instances where one goes through each stress, Enrique pulled up a 5-minute video that took scholars on a journey into the biochemical effects that temporary and prolonged stress have on the body.

Scholars then formed a circle where they discussed everyday and atypical examples of stressful situations, both positive and negative. In one example, the character was a sixteen-year-old female honor student who had two younger siblings, worked part time, and played hockey. The mother was concerned because she wasn’t eating much at the dinner table and didn’t engage in conversation. NAC scholars then found out that the character in the story would recently snap at her younger siblings when they didn’t understand the concept of the homework she was trying to help them with. The character also blanked out at work while talking to customers, took longer to finish homework, had chronic stomachaches, and felt horrible for not having enough time to complete her tasks. NAC scholar Gaby Maldonado was the first to raise her hand, noting the character was going through emotional and physical stress due to her short temper and stomachaches.

The second half of the presentation focused on culture-specific stressors that first-generation students in college go through. De La Riva advised scholars to “be open to opportunities and resources.” She continued, “I learned in college that taking advantage of resources helped me out more than they hindered my future. First generation students in general tend to hesitate seeking out resources. They don’t want to come across as needing something or lacking abilities to thrive.” This advice was crucial as a handful of students in the audience are bound to start college this fall.